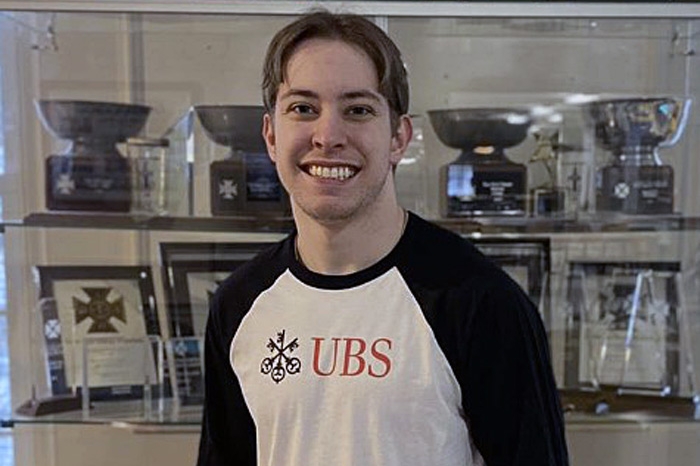 “I want to work in investment banking, and I know it’s a challenge to get an internship with one of the big multinational firms. This especially applies if you aren’t from a top finance institution, such as NYU or an Ivy League school,” said Checcio, who is majoring in Finance. “So, I realized I couldn’t just send out some résumés online and get an internship with a major investment bank that easily.”

Additionally encouraged by his supervisor at Waddell & Reed, Checcio took the initiative and introduced himself to an administrative assistant at UBS in Pittsburgh’s BNY Mellon Center.

“I was trying to meet with a manager or someone from HR, but since it was still the early days of COVID-19, she politely told me that she was the only one there,” he said. “However, she said she would share my résumé with her boss, and I got a call a few days later.”

The first impression helped, but UBS wasn’t sure if they would be hiring interns for the summer of 2021 because of the pandemic. Checcio was determined, though, and continued to call and email until one day he found out that the intern program was going to happen.

“When I finally got to have a final formal interview, the interviewer told me the team seems to really like me and to look out for further instruction,” Checcio said.

Checcio will continue to intern with UBS this summer, on top of already starting this spring, and he will gain more experience in wealth management with one of the top investment banks internationally. Marietta College is also recognizing Checcio as the 2021 recipient of the Robert Evans Internship Endowment Award. He is the 12th recipient of the honor.

Denise and Mike Salvino ’87 established the Evans Endowment Fund in the spring of 2010 to honor Robert Evans and his contributions to Marietta College and the McDonough Leadership Program. The program awards $5,000 to one rising junior or senior who participates in an internship in a for-profit organization.

The $5,000 can be used for relocation, travel, housing, meals, related equipment purchases and other living expenses. Eligible applicants can be in any undergraduate major with a minimum GPA of 3.0.

“There are two aspects of my internship that I shared when applying for this award that I felt the financial award would help me,” Checcio said. “There is the personal side and the digital side. If I want to work with high-net-worth clients and I want them to take a 20-year-old college student seriously, thus I am considering what type of technological equipment, or formal clothes, I could utilize to be the most presentable.”

“Since the first time that we met, he has always told me, ‘I would like to work for UBS, and I would love to be in wealth management.’ I also appreciate his proactive approach to coursework planning; he knows exactly what he needs to do to have a successful college experience,” she said. “I just have had Alexander in one class this semester, and I hope I will have more time to get to know him better in the future.”

On top of his internship, Checcio will also be taking courses at the California University of Pennsylvania, where he is working on a secondary concentration in Arabic Language & Culture Studies.

“I believe this makes me a competitive candidate,” Checcio said. “Considering there are likely not a lot of wealth managers who can speak Arabic, this should give me an advantage of attracting clients from the Middle East.”

Checcio was a student in Dr. Nathan Anderson’s Business Writing course in the fall. At some point during the semester, Checcio spoke with the professor about learning Arabic.

“He wondered if I would be willing to help him with a Domestic Off-Campus Study proposal,” Anderson said. “I was happy to help Alexander and confirmed that Arabic was a good choice for language study as it will distinguish him as a candidate for internships and jobs in the field of finance. We were both very pleased that the proposal was accepted so that Alexander could begin his Arabic language and culture program.”

Anderson is confident Checcio will be a successful intern.

“Alexander always looked for ways to improve his academic skills — writing, reading, critical thinking, etc. We met often to review the drafts of his projects for WRIT 305. He recognized the importance of communicating effectively, and the effort he put into the course was admirable,” Anderson said. “Alexander is an ideal student to have in the classroom. He is engaged and dedicated, and the way in which he strives to be a well-rounded student reflects the spirit of the liberal arts here at MC.”