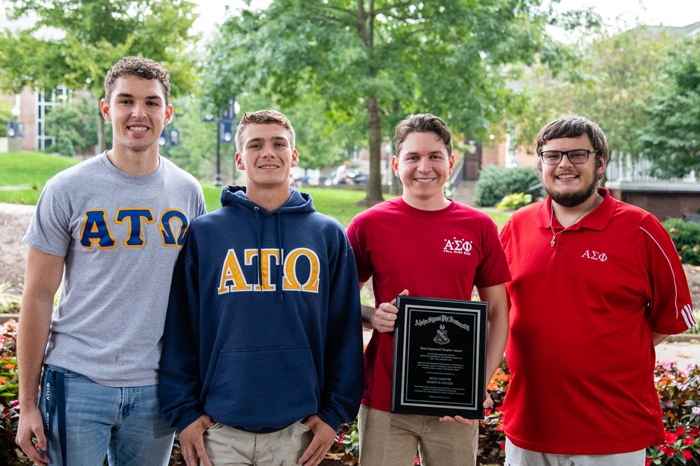 As alumni look to October for a return home and new members review the values that drew them to accept their bids, Greek life at Marietta College continues its legacy of excellence into this school year.

Two fraternities are building off national successes despite the impacts of a pandemic.

“They really, truly, do exemplify a solid brotherhood that you can see, that’s heartening to have that on campus,” said Assistant Director of Campus Involvement Ellen Campbell as she beamed with pride celebrating fraternity recognitions for the 2020-21 successes of Alpha Sigma Phi and Alpha Tau Omega.

Both have demonstrated the shared values expected of Greek students supporting each other in academics, public service and learning to document such skills for national review. With the motto to “Better the Man,” Alpha Sigma Phi entered this academic year with two national recognitions: Most Improved Chapter and the Alpha Kappa Pi Gold Cup.

The Most Improved Chapter Award is given to the chapter that has demonstrated significant improvement from one award period to the next award period. The Alpha Kappa Pi Gold Cup is presented for achieving exceptional recognition in all areas of the Annual Report. The chapter must be in good standing to earn this cup.

“So, their annual report has them reporting on things like their grades and talking about their academics. If there are issues, what is the chapter doing to rectify those issues,” Campbell said. “It’s going to talk about their philanthropic work. How many service hours as a chapter did you do? What were your events? Then, social — being a good member of the group community and doing things with other chapters, fraternities and sororities, being a part of the life of the campus.”

But Campbell said she’s most proud to see the communications skills growing in the young men as the chapter continues to reestablish its place on campus since rechartering in 2012.

“That interpersonal conflict resolution, and, and really working through and being open to communicating with each other,” she said. “At the end of the day, regardless of if they agree or disagree with one of their brothers, they support the daylights out of each other.”

Alpha Tau Omega’s Beta Rho Chapter prepares to welcome home its alumni for the 131st celebration of chapter reestablishment, the men have for the sixth year in a row earned national fraternity recognition.

“Two of the highest honors the fraternity bestows are the True Merit and True Merit Honorable Mention,” said Chapter Advisor Roger Patterson ’62. “That’s nationals looking at how these men have developed in leadership skills, in service in the community, and in their academics.”

The chapter, according to the national fraternity, “showed overall improvement in chapter operations, campus involvement, recruitment and communication” despite the stresses and challenges of coronavirus impacting the 2020-21 school year, a feat Patterson ties specifically to the morale and camaraderie that a Greek membership boosts through tough times.

This year the chapter took home the honorable mention with eyes on additional refinement and academic improvements to shoot for in the 2021-22 school year.

“We never had to do it alone,” said Chapter President Tyler Walker ’22 (Cambridge, Ohio). “COVID drastically reduced the freedom that we had in overall chapter activities when it came to brotherhood building, philanthropy and social service.”

Those three building blocks turned mostly virtual, and the chapter experienced the pandemic firsthand with an outbreak threatening to disrupt the connections built within the membership.

“It felt as if we would have nothing more than a wasted school year,” Walker said. “Yet, we overcame. We counted on each other to do their part to keep the fraternity going. We pushed each other to be better brothers, better men, and to uphold the virtues of our fraternity in our day-to-day lives.”

The chapter also was recognized with the Upper Alpha award identifying that its alumni have continued to invest their time and resources into their chapter, campus and philanthropy after graduation.

“This award recognizes ATO’s top Board of Trustees who provide exceptional leadership and service to a chapter,” wrote the national fraternity.

“For the last 14 years we’ve gone on an MS 150 ride each summer, that’s 75 miles a day for two days and they’ve built what’s now a tradition in the Bike for M.S. fundraiser over homecoming,” Patterson said. “Between the two and the men learning to raise funds through their networks and on campus, this summer we broke $155,000 that the chapter has donated for M.S. research.”

For Patterson, he loves that the involvement includes extensions onto campus and friends of alumni, furthering the reach of the philanthropic work and the brotherhood’s values.

“Each pledge class has their own personality, and it can change every couple of years what the makeup of the house is, but the values remain,” Patterson said. “And when they come home and we see alumni for dinners and on the bikes raising funds ... when you see them together it’s like they’ve only been separated for a weekend, not for years.”