During her most forlorn time, Hannah Garofalo ’21 leaned heavily on her Marietta family 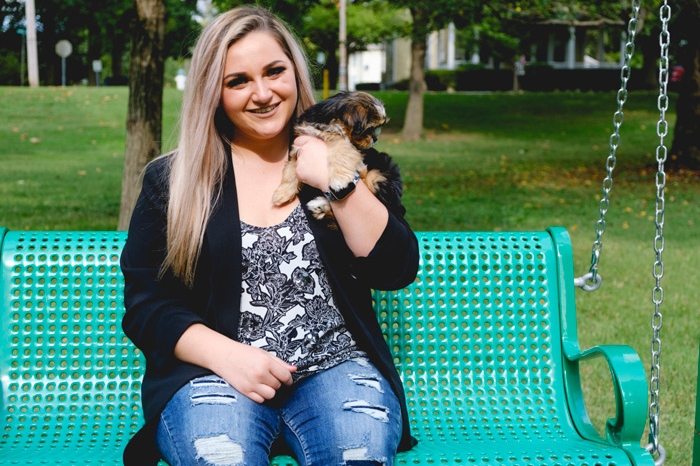 Her world was crumbling all around her. No, it was actually in a freefall and Hannah Garofalo ’21 didn’t know what to do next.

Just 16 days after finding out her junior golf season was canceled because of COVID-19, Hannah’s grandfather, Lorenzo “Larry” Garofalo, succumbed to the virus at the age of 85. At the same time, her father, Steve, was in the hospital battling the virus while on a ventilator and in a medically induced coma.

It wasn’t too much longer before Hannah, her mother Dianna, and her brother, Nathan, also tested positive for COVID-19.

“I had a fever and some symptoms, and I have asthma, so I had some breathing issues,” Hannah says. Her mother and brother were asymptomatic.

As her father battled for his life, Hannah became the emotional rock for the rest of her family. When she needed to speak with someone, she leaned on her second family — her Marietta College family.

One of her first calls was to Bill Ruud, Marietta College’s 19th President.

“From my first day on campus, I have had a wonderful relationship with him. He’s helped me a lot and he’s taught me a lot,” Hannah says. “During all of this, I was having a bad day and he just happened to call me, and he told me, ‘We’re here for you and whatever you need we’ll get it done.’ ”

Hannah learned how serious President Ruud was when her family was trying to have her father transferred to Cleveland Clinic.

“I told him we were running into some issues, and he said he would see what he could do,” she says. “I’m thinking, ‘What can the Marietta College President really do?’ Well, he got back to me in an hour or so and said he had spoken with some alumni and he also gave me some numbers of people to speak with.”

Her father ended up staying at St. Elizabeth Boardman Hospital, but the offers to help meant a lot.

When Hannah’s life was disrupted, Marietta’s leader did what he does best.

“I have been in higher education for more than 40 years, and I have always prided myself on thinking about the people we interact with every day,” Ruud says. “It is the people who make Marietta College so special, and when Hannah needed her second family more than ever, it was important that we were there for her. I told her she could call me any time of day and I would be there for her.”

And he still is today.

That personal investment in every student has been a trademark of President Ruud’s since he arrived in 2016. In normal times, he provides guidance on how to improve in the classroom and mentors students with career advice. When the pandemic hit, his focus shifted on making sure students had the care and support they needed — including being the calm and reassuring voice of the College in emails, live town halls and special video messages, having the bandwidth on campus increased so local students could have reliable Wi-Fi access, ensuring that the food pantry remained open and accessible — even by mail — to students experiencing food instability, and by supporting the health center’s transition to tele-health and tele-counseling services.

Hannah continues to stop by the President’s office for a quick chat or some advice.

“When I first got back on campus, I felt like I was home,” she says. “This is where I belong, and I needed the routine of being in class.”

However, during some of her toughest nights, Hannah connected with her golf coaches — Tom Arison and Callie Witkosky.

Arison says he went from the disappointment of the spring season being cut short to realizing he still had an important job to do.

“My role of coach went from advising on the golf course to guiding Hannah on how to handle her situation and emotions,” says Arison of one of his first recruits. “Although it was hard at times to be strong, Hannah kept her head on straight and led her family through the most difficult time she has faced in her 22 years on this earth.”

Hannah admits that she still has her ups and downs, and she hasn’t completely processed the loss of her grandfather and how close she came to losing her father. But she is forever thankful that her Marietta family was there when she needed them.

“Seriously, I wouldn’t get this anywhere else,” Hannah says. “The fact that I had all of these people making sure I was OK. The previous professors who I had checking in with me and everything President Ruud and his wife did for me are not the type of things you even consider will be part of your college experience. Thinking back on it now — and even at the time — it made me happy to be part of the Marietta College family. I will be honored and proud to donate money to Marietta College after I graduate because it has given so much to me.”