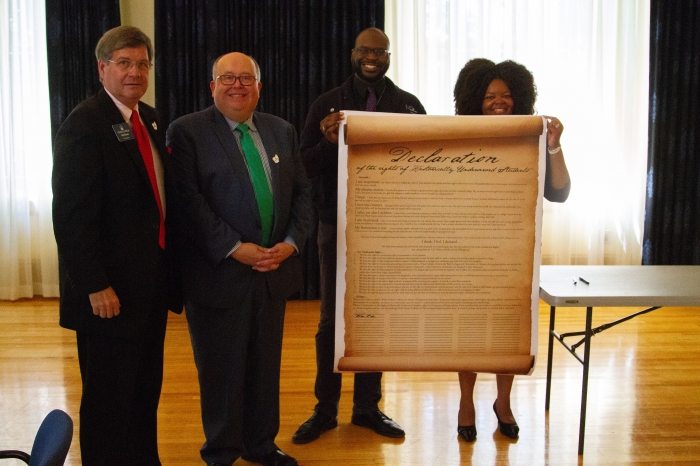 In the eight months she has been at Marietta College, Dr. Nkenge Friday, Associate Dean of Students and Director of Diversity & Inclusion, has met with countless members of campus to gain a better understanding of the state of diversity and inclusion at Marietta — with a goal of creating ways to add and keep inclusiveness moving forward.

Nearly 40 members of the Marietta College community gathered in Andrews Hall’s Great Room Tuesday to celebrate and learn about the new programmatic approach of the Office of Diversity & Inclusion, and to sign A Declaration on the Rights of Historically-Underserved Students.

Friday discussed the Get Energized, Get Involved and Get Impacted approach that the new Office of Diversity & Inclusion is taking to ingrain those values into the fabric of the College. One aspect included the recent opening of the new Multicultural Center, which is located in the Arts & Humanities House on Fourth Street and is open to all members of the Marietta College community.

About 75 students participated in the grand opening on September 2nd. The center is open from 10:00 a.m. to 7:00 p.m. daily. She also discussed the revitalized Charles Sumner Harrison Organization, LGBTQ efforts and activism, and other programs such as Brother 2 Brother, Global Connections, Ambassadors for Inclusive Excellence, and the Council for Inclusive Excellence. In October, the campus will be invited to participate in specialized programming — One Marietta — that gives the community opportunities to learn about diversity and inclusion, and spend time with a cross-section of campus in a social setting.

“My vision of diversity and inclusion at Marietta College revolves around the following: mind and heart — we will engage not just our minds, but also our hearts, which lead to emotional insights, empathy and deep connections; conversation and dialogue — we will foster honest and challenging conversations that engage our campus and the Mid-Ohio Valley in constructive and productive ways,” Ruud said.

Other aspects include data and information, accountability and transparency, workplace recruitment and retention, professional development, and finding solutions.

“Marietta College will critically investigate and improve the structures and systems intended to support diversity and inclusion in order to open pathways to uncover and reveal discrimination and to engage in seeking powerful solutions,” Ruud said.

He added that the creation of the Multicultural Center and the hiring of Friday and her supporting staff were steps in the right direction.

“I define the historically underserved in a very broad way,” Gilmer said. “Anyone for whom American higher education was not designed. Women of all kinds were obviously the first historically underserved students because — guess what — though there are so many women have excelled in so many ways and gained so much education over the years, our system was not created with women in mind.”

Gilmer said gender, sex, race, sexual orientation, first-generation college status, academically underprepared, veterans, students from different religious backgrounds — “all of these and many, many more groups that I could name have been historically underserved,” Gilmer said. “Dr. King tells us that the arc of the moral universe is long but it bends towards justice. I believe that and I believe that (President Ruud) is right when he stands before you today saying that we have to have heart and we have to have the mind. We can’t bend that arc towards justice with just our minds and we can’t bend it with just our hearts; it requires a combination of both of those.”