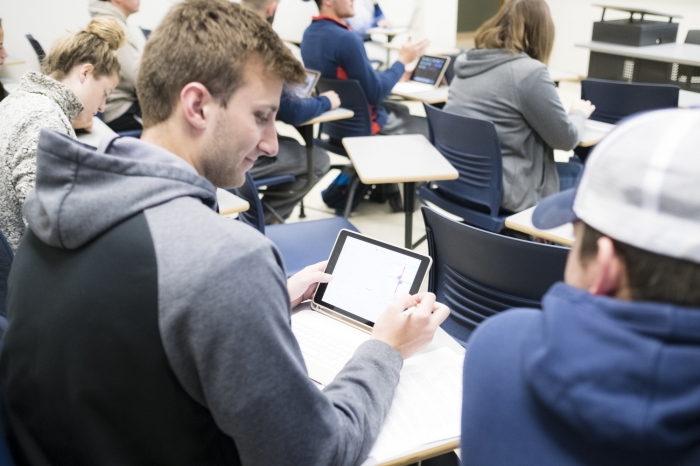 Technology has made its way into just about every profession, which makes it crucial for colleges to find ways to blend its use in every major.

For Marietta College’s newly revamped History 220 course, History Professor Matt Young has placed 49 iPads into the hands of students to learn about Human Geography and Geographic Information Systems, or GIS.

“I've been personally interested in GIS for a long time, and see it as a complement to the fundamental writing and critical thinking skills undergraduates in traditional liberal arts majors develop,” Young said. “GIS is a skill that is in-demand in many fields in both the public and private sectors, and it will give Marietta College graduates new opportunities.”

GIS uses digital mapping and data to answer spatial questions and solve geographical problems. The traditional Human Geography course has been a required component to complete the College’s recent addition of a GIS minor; this semester, Young has worked to revamp the class to contain what he called a “healthy dose” of GIS.

An Introduction to Human Geography is a general education class that focuses on all aspects of human society; population, migration, urbanization, religion, race and ethnicity are just a few of the topics covered in the class. Young explained that geographers are particularly interested in the spatial distribution of human activity and what impact a region’s development has on a particular topic.

“For example, as a society develops, its growth rate slows, but its per capita resource consumption increases,” Young said. “To put this another way, citizens in wealthier countries consume far more resources on an individual basis than citizens in poorer countries. Because growth rates are now slowing dramatically, the planet’s population will level off somewhere between 9 and 11 billion by the end of the century. We’re not adding as many people, but we’re consuming more. And students in the class are able to discern what’s happening using the latest data in class from sources like the United Nations and the World Bank.”

The iPads allow students to interact with map data inside and outside of class. Young specifically called out resources such as the Ecological Footprint Quiz, which helps individuals determine how many resources they use. Through the Apple TV, any class iPad can be displayed on the screen. This has allowed the class to easily view maps they produce outside of class as well as conduct collaborative group work.

Shannon Haessley ’20 (Marietta, Ohio), a Public Accounting and Finance major, said she took the class as general education requirement, but was drawn to it so she could gain a better understanding of geography and be introduced to GIS.

“I love the use of the iPads,” Haessley said. “It is very convenient to have the opportunity to have my work shown on the main screen in class. Also, it is nice to be able to physically touch the map or whatever we are using in class. Using notability is also very convenient because it is super easy to write down my notes while integrating maps and other graphs we use in class.”

Young said the students are teaching him while in class, as well.

“They have found excellent map quiz apps and demonstrate all kinds of amazing iPad shortcuts,” he said. “If I hear about something a student has found that I think everyone would profit from, it is easy to enable them to show the rest of the class.”

Human Geography has proven to be a popular general education course. While many majors and minors are required to take it, Young said over a four-year cycle, approximately one in five Marietta College students take the course. In other words, many students will have the opportunity to be exposed to GIS.

Young believes this could be a transformative opportunity for individual courses as well as for the entire student body. Students have been using the iPads in other courses, and other faculty members have observed the class. In the meantime, Young has thoughts on how he wants the class to evolve.

“Once we’ve done the initial run-through, I will continue to tweak this until I have it the way I want it,” he said. “I want to work more toward ‘flipping’ the class — meaning students do preparation and reading outside of class, and then focus on application and critical analysis during class. Now that we’re actually working the iPads, the possibilities are far more apparent, and with the ever-expanding amount of online GIS resources, the course will get better and better.”