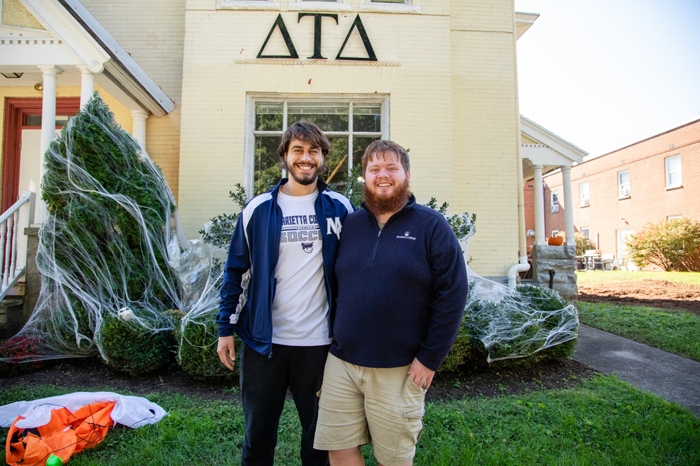 Removing barriers to education includes, according to a group of Marietta Greek alumni, investing in student success outside of the classroom.

The Marietta Delt Educational Foundation has for a second year followed that mission to invest in its membership through the use of its Maloof Grant program led by not only alumni of the Marietta College chapter of Delta Tau Delta but also its continued friends and current faculty.

“The foundation is composed of alumni from Marietta College and friends of Delta Tau Delta here at the college and basically we looked to our experience as undergrads, and those who were from lower socio-economic statuses or were first-generation college students and we wanted to come up with a program that could help undergraduate men join a fraternity (without) a barrier of finances,” said Dr. Cody Clemens ’13, both an alumnus of the Marietta chapter and current Assistant Professor of Communication.

Thus, in the midst of a pandemic in the 2020-21 academic year, the Maloof Grant program was born and relieved a portion of membership dues for two active members.

Greg Maloof ’67 was a founding member and president of the local fraternity Beta Delta Epsilon in 1966, which became the Epsilon Upsilon chapter of the national fraternity in 1968, and he remains the chapter’s oldest living alumnus.

This year, that spirit of giving supported by alumni afforded aid for two active members.

“We were cautious in the way we designed the Maloof Grant because we firmly believe that in order to be successful in an organization you should have some kind of skin in the game,” Clemens said.

And that investment is not only monetary, but also in how the student can both demonstrate their commitments to academics, leadership and public service.

“They want somebody who’s involved, if you’re not on the executive board, you could be an incredible volunteer, you can mentor brothers, you can organize study groups but how are you creating good within the chapter?” Clemens said. “Then, they have to write an essay talking about what the Maloof Grant would mean to them and how Delta Tau Delta has influenced their life.”

As a Communication Department faculty member, Clemens emphasizes that skill and its applicability both within the chapter and in the brothers’ futures.

“In order to be an effective member of any organization you have to be a great communicator, and that includes both oral and written communication skills,” he said. “So, we want them to do an essay, to show us that they can write, they can communicate effectively about that change in their life and they can show us how they're contributing members of or to the organization.”

This year, Chapter President James “Orv” Taylor ’22 (St. Marys, West Virginia) and Felipe Cruz ’22 (Marietta, Ohio) were selected by the foundation with $500 of their fall dues covered, each.

Taylor, who has received Maloof awards both his junior and now senior years, appreciates how the foundation looks at him as a whole.

“Not just one side of my personality or my presence on campus,” he said. “But as an adult … it looks at leadership, involvement, academic and interpersonal successes.”

And for the time spent double-majoring in Finance and Petroleum Engineering, to also emulate the values he admires in Greg Maloof, takes dedication.

“I love going to dinner with Greg … and of him, what I really try to emulate is making sure to give back, making sure to use the guidance and the help that people have given you to turn around and help the next guy in line,” Taylor said. “What conversations with him taught me is to be aware of what’s going on around you. Look for the brothers that need help, whether it’s academically, financially, or any other need, and don’t ever look for a pat on the back, just do it and do it with all the goodness of your heart. Because he truly is the biggest idol for that.”

For Cruz, the camaraderie and brotherhood found within the chapter anchored his time in a foreign land.

“I am an international student here at Marietta College, which made it a bit extra challenging to get involved with people and make friends. By the end of my freshman year I was still feeling like I didn’t belong here until I met some of the guys from DTD,” he said. “I met a lot of them at a volunteering activity that they were involved in, which showed me how involved they were not only on campus, but also with the community.”

He joined the chapter in aiding the local Kiwanis Club, seeing that reinvestment in the surrounding community and the physical asset the brothers play in local philanthropy success.

“I felt great around them. They were all there, investing their time to do something good for the community,” Cruz said. “Not to mention the sense of friendship that they nourished from each other. I felt pretty comfortable around them, which made me feel accepted.”