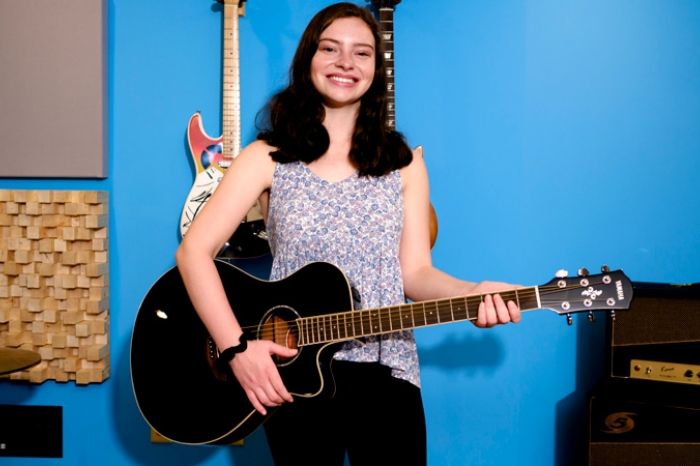 Unlike the majority of her Longwood High School classmates in Middle Island, New York, Lindsey McCoy ’24 started her college career with in-person classes this fall.

“I feel very lucky to be on campus, because most of my friends are attending colleges where they are remote-only this fall,” Lindsey says.

She also feels fortunate to be the 22nd recipient of the John G. and Jeanne B. McCoy Scholarship. The scholarship program was endowed in 1998 by John G. ’35 and Jeanne B. McCoy to promote and recognize outstanding academic ability and achievement in an incoming freshman student. The award includes tuition, fees, room and board, and is renewable for four years.

“When I applied for the scholarship, I thought I might have a chance to get it, but I knew there would be many other strong applicants,” Lindsey says. “I remember I got a call from President (Bill) Ruud on February 11th to tell me I was the scholarship winner. I think he was expecting me to be more excited, but I was so in shock I didn’t know what to say.”

Lindsey was also slightly concerned that since she shared the same last name as the scholarship that it might work against her. Despite the fact she has a grandfather who is John McCoy, she is not related to the McCoys who funded the scholarship.

“The first person I told was my co-worker at the public library,” Lindsey says. “She has been a role model for me and she kept telling me I would get it.”

One day early in the fall semester, Lindsey was lounging around with her roommate chatting about the paths they took to get to Marietta College.

Her roommate and high school friend, Kyla Andreas ’24, made up her mind early on in her senior year of high school to be a Pioneer and join the women’s lacrosse team. It took Lindsey a little longer and some persuading from her friend because she wanted to stay closer to her Long Island, New York, home.

“She would tell me about Marietta College and how she wanted me to look at it,” Lindsey says. “But I honestly never thought about going this far away from my family.”

Her interest in Marietta started to percolate a little when she learned about the Music Therapy program, so one afternoon after school she applied to Marietta and she quickly realized she was interested in the school 11 hours from home.

“When I told my mom that I thought I had found the right college for me, she asked me where it was,” Lindsey says. “When I said Ohio, she said, ‘Oh, no!’ ”

But her mom, Christine, started doing her own research and quickly realized Marietta might be a good fit for her youngest child.

“She’s my baby and my only girl and my other two children stayed at home. I told her through high school that four hours from home would be good, so if she had to get home she could,” Christine says. “We are so proud of her. The scholarship certainly sealed the deal, and we realize this will open up so many opportunities for her over the next four years.”

Christine says she and her husband, Paul, still had some concerns about Lindsey being so far away from home. But those fears quickly subsided while they moved their daughter into her residence hall room in August.

“Of course, bringing her to campus in August was bittersweet but we are so thrilled that Marietta is open and that she is able to go to school again,” Christine says. “I can honestly say that when it was time for us to leave, I didn’t cry because I felt like she really had found her second home. Everyone was so nice and my husband and I were so impressed with everything the College did to get ready for the semester so that she would be safe.”

Right now, Lindsey is focused on getting up to speed in her major. She got a bit of a jump start this summer by taking online guitar lessons with instructor Robert Coddington.

“Where I live, we didn’t have any programs that could prepare me for music therapy, so I’m slightly behind because I never took any music theory classes,” she says. “When I was in high school, I was thinking about studying psychology, social work and special education. But I was in every musical we had and every choir in my school, so I learned about music therapy and I realized it combined everything I wanted to do.”

She plans to take advantage of her situation, too.

“I’ve been given a gift and I’m not going to waste it,” Lindsey says. “I feel I have to do things that I may not have considered or believed I couldn’t afford before. I can’t imagine being this generous. I will never get to meet them, but the McCoys were able to think so far down the road and realize that they could help pave the path for someone’s life every single year. What amazing people to set aside that much money and be that kind-hearted.”