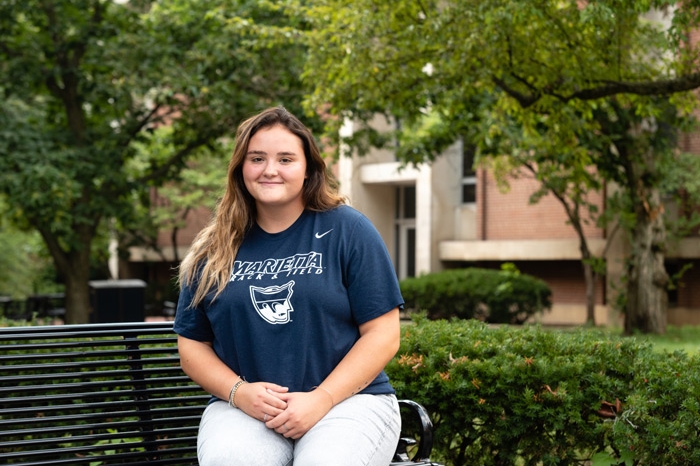 If Savannah Flusche ’25 (Gahanna, Ohio) doesn’t recognize the number when she gets a phone call, she typically ignores it.

In February, when she got a call from Marietta College President Bill Ruud the number was not one that registered — so she disregarded it. Thankfully, he left her a voicemail and she called right back.

“That was when I found out I received a Trustee Scholarship,” said Flusche, who is majoring in Marketing. “I was so excited because I really wanted to go to Marietta.”

A few weeks later, her phone rang again — and she ignored it again.

“I didn’t realize it was President Ruud calling or I would have answered it,” she said with a laugh.

This time he was calling to let her know she would be the 23rd winner of the John G. and Jeanne B. McCoy Scholarship. The scholarship program was endowed in 1998 by John G. ’35 and Jeanne B. McCoy to promote and recognize outstanding academic ability and achievement in an incoming freshman student. The award includes tuition, fees, room and board, and is renewable for four years.

“The best part about the whole thing is that I get to go to the school I wanted and now I can go there with no worries for my family financially,” Savannah said. “I’m sure my parents understand it better than I do right now, but it is exciting to know that I will graduate from Marietta College completely debt free.”

Her mother, Dana, said she and her husband, Mike, are proud of what Savannah has accomplished.

“Savannah has always been a very hard worker. We have always stressed the importance of an education,” Dana said. “We are not wealthy by any means, as her father and I are both teachers at inner-city schools. But this has helped Savannah understand that she does have some advantages and it has also made her more empathetic toward others. She has worked so hard, and it’s really paid off for her.”

Savannah hopes to get involved with the Student Government Association and rush a sorority, but she is already committed to throwing the shot put and discus for the track and field team.

“I had no clue what Marietta was until the track coach reached out to me,” she said. “We talked for an hour on the phone. It was really the first coach who recruited me who actually cared about me as a person.”

That phone call led to a visit.

“It was actually the first place I visited, and once I got here, everything was perfect,” Savannah said. “Everyone I talked to was so nice. I spoke with Dr. (Jacqueline) Khorassani about Entrepreneurship, and I connected with people in Leadership. I went home and told my mom that Marietta was a real possibility.”

However, she knew she needed to visit some other colleges before she could be certain.

“None of the others even came close to comparing to Marietta,” Savannah said.

“I haven’t developed a super close relationship with any professors yet, but I feel it will happen. I do like my leadership class a lot because it’s more applicable for what I want to do in the future.”

Her goal is to run her own marketing firm, which is something she’s been dreaming about since she was in eighth grade.

Savannah is still close with her three brothers and goes home occasionally to watch Griffin, who is 16, play football at her alma mater, Gahanna Lincoln. But she’s settling in just fine in Marietta.

“She loves it,” her mother said. “I told my husband that my fear — and hope — was that she was going to fit in and not miss us that much. She’s made friends. She’s a very outgoing person and I can see that she has her athletic friends and her academic friends. Her friend group is made up of people across the entire campus.”

Savannah admits that she misses her two dogs and her family, but she has shared with them a few times that she loves her new home.

“I texted my mom the other day and told her I picked the right school,” she said. “I think that makes them feel good because they know I’m comfortable here. The people and atmosphere are what sets Marietta apart.”