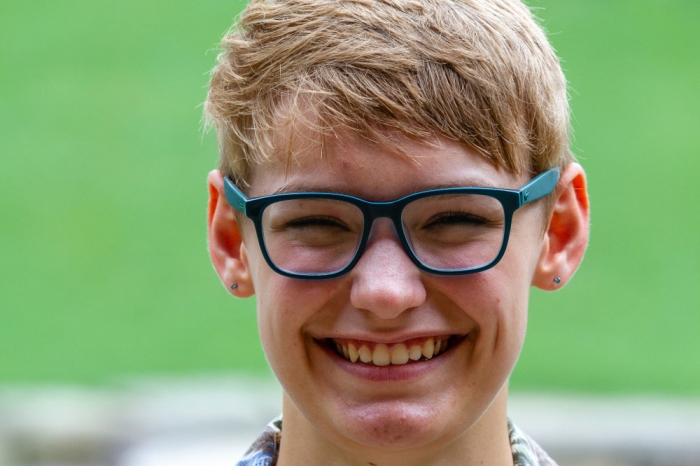 By the time Rowan Henderson-Bernard ’22 (Columbus, Ohio) found Marietta College, she had already told herself and her mother, Julie Henderson, that her college search was done.

“I was really over the whole process and told my mom ... to kindly stop sending me links to new programs and schools,” she said.

Rowan’s college search was over, that is, until her mother found the McDonough Leadership Program. The Fort Hayes Art and Academic High School graduate said she was amazed by what she found.

“The Leadership Program was a huge draw. The [International Leadership Studies] major was everything that I was looking for, combined into a ... really highly regarded program.”

Rowan’s interest in the program stemmed out of her desire to work with international women’s rights organizations. Though uncertain if she wants to work in policy or the nonprofit sector, Rowan knows that McDonough will give her the skill set and flexibility to be a part of the new-wave women’s rights movement in a variety of ways. To make such a perfect fit even better, Henderson-Bernard was selected as Marietta College’s 20th McCoy Scholar.

The John G. and Jeanne B. McCoy Scholarship Program was endowed in 1998 by John G. ’35 and Jeanne B McCoy to promote and recognize outstanding academic ability and achievement in an incoming freshman student. The award includes tuition, fees, room and board, and is renewable for four years. That will add up to around $185,000 for Henderson-Bernard.

Before she had even won the prestigious scholarship, Rowan had already made her choice.

“I had it down to three or four schools that I really liked: Juniata College, Wooster College and Marietta. It was pretty much tied until I [stayed] overnight here. I stayed with Theresa LaGreca ’21 (Pataskala, Ohio) and she was so kind. She took me out to meet her friends and ... showed me a place where I could see myself being happy and finding home. It was a huge moment for me. … I knew that this was where I needed to be. It just felt right.”

The College's friendly and accommodating campus was another selling point for Henderson-Bernard.

“Scott McVicar, my Admission counselor, went out of his way to put together a special visit for me. ... I was so surprised by how accommodating everyone was before I even got there.”

She was also lucky enough to get an idea of campus culture before she even arrived as a student, thanks to Emily Vigue ’19 (Lancaster, Ohio), current Student Body President and Lead Student Ambassador for the Office of Admission.

“She was waiting to take a different tour group. I wasn’t in her group, [and] she didn’t have to talk to me, but she did, she went out of her way to tell me about the United Women of Power group on campus, the people, and really just gave a great representation of how truly kind the student body is,” Rowan said. “Meeting people and seeing how much of a family there is on campus really sold Marietta to me.”

Dr. Gama Perruci, Dean of the McDonough Center for Leadership and Business, said he has been impressed with Rowan’s passion for global issues.

“One thing that strikes me [is that] she is very thoughtful and has been very articulate in the way that she presents her opinion. [She] does not shy away from disagreement — not that she is mean or tries to put others down ... she is very respectful, but at the same time, she is not shy about presenting her views.”

Rowan is grateful to be one of Perruci’s students.

“I met [him] on my first tour of campus and was struck by how wise and kind he was,” she said. “He really helped me understand what I would be getting myself into with the [McDonough Leadership Program]. Since I’ve been here, Dr. Perruci has invited me to several luncheons and has really opened doors for me.”

Perruci agrees Rowan is a student who is suited for the McDonough Program.

“I think that she has been a wonderful addition to the Leadership Program,” Perruci said. “She will continue to grow and will be a very, very thoughtful and engaged leader. After graduation, [I see her] doing wonderful things on a global level. I’m looking forward to seeing how she will grow and the kinds of things she will be doing in the future. It’s very exciting.”