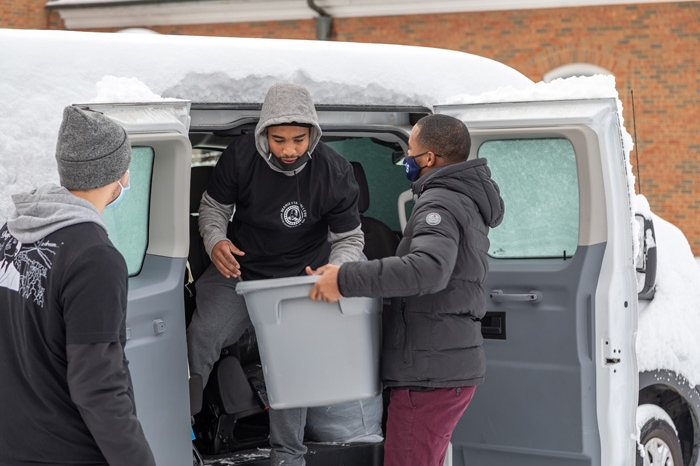 A major snowstorm didn’t deter hundreds of students and employees at Marietta College from participating in a day designed to honor the late Rev. Dr. Martin Luther King Jr.

On January 17th, Marietta College hosted the MLK Day of Service & Reflection on campus. After an early morning breakfast, a group of about 325 students, faculty, staff and administrators listened to a recording of Dr. King’s address to Marietta’s campus on March 2, 1967. Eight current students also spoke about what service and social justice means to them. Yasmeen Hall ’25, a Charles Sumner Harrison Scholar, was among the featured speakers.

“As a CSHO Scholar, I knew I would have the opportunity to be involved and have a voice on campus, but I didn’t think I would have so many opportunities to speak to campus as I’ve had so far,” she said.

Following the student speakers, Robert Nelson ’21, an intern in the Office of Diversity & Inclusion, introduced the keynote speaker, Odell Bizzell, an activist, author and entrepreneur. Because of the weather, Bizzell spoke to campus via Zoom about the lessons that Dr. King and Malcolm X would focus on in today’s society.

“We decided it was important to share with students the strength that MLK Jr. spoke with, and the significance of social justice through the eyes of some students it has affected,” Nelson said. “We were also grateful to have Odell Bizzell give a unique presentation that provided insight to what Dr. King and Malcolm X would have taught as modern-day leaders. The overall experience of the program was motivational, energetic, and aimed to inspire more action beyond January 17, 2022.”

Before students and employees broke into groups to tackle roughly two dozen volunteer projects, Marietta President Bill Ruud thanked everyone in the room for spending the morning learning and volunteering, and encouraged students to speak up when they see an opportunity to change things for the better. For instance, prior to 2018, the College held classes during the day and offices remained open. Ruud and administrators saw the day as an opportunity for students and employees to engage in learning and volunteerism together, so MLK Day became a campus-wide day of service and reflection.

This year, about 425 students and employees contributed 850 hours of service for the community, including making care kits for the local domestic violence shelter and the human trafficking support center, coloring kits for the child visitation center, and artwork for a suicide prevention organization.

Christy Burke, Chair of the MLK Day of Service and Director of the Education Abroad Program, said student groups like the Charles Sumner Harrison Organization, Global Connections, LGBTQ+Activism, the Gardening Club, National Society of Leadership and Success, Athletic Training Program, Greek organizations and Marietta’s athletic teams provided a great deal of volunteer work. Some of the groups helped during the lead-up to the event and some planned to conduct volunteer projects later during the week, including a blood drive and a visit to the Boys & Girls Club.

Henry Gyamfi ’23 and George Fazah ’25 worked in the Trustee Conference Room with members of the Athletic Training graduate program sorting and bagging clothing donations for the Gospel Mission Pantry and the Salvation Army.

Vinny Tassari ’23, Bam Jackson ’25 and Nate Hinckley ’22 were among the student-athletes who carried numerous bags of clothing and bedding to passenger vans.

In the Gray Conference Room, women’s rower Michala Donnelly ’24 worked with Education adjunct Sarah Jacobs and her daughters Lucy, 10, and Hattie, 7, to create Easter baskets for the Salvation Army.

“I also want to recognize Ellen Campbell (Student Life), Tony Mayle (Office of Diversity & Inclusion) and Rob Nelson for being a part of the planning committee, as well as the students who signed up to be the student voices during the planning (Rowan Henderson-Bernard ’22, Raynne Parsons ’22, Ava Kazmierczak ’25 and Kaylie Ward ’24),” Burke said.

After the volunteer projects were completed on Monday, Education interns led a discussion surrounding the book, “The Hate U Give,” by Angie Thomas, in Thomas Hall.

“Martin Luther King Jr. Day has a powerful history, and it is important to understand the context behind the day,” Nelson said. “At Marietta College, we have given the day recognition through the integration of service projects throughout the campus and surrounding community, but we also give students the opportunity to understand the powerful history fueling these projects.