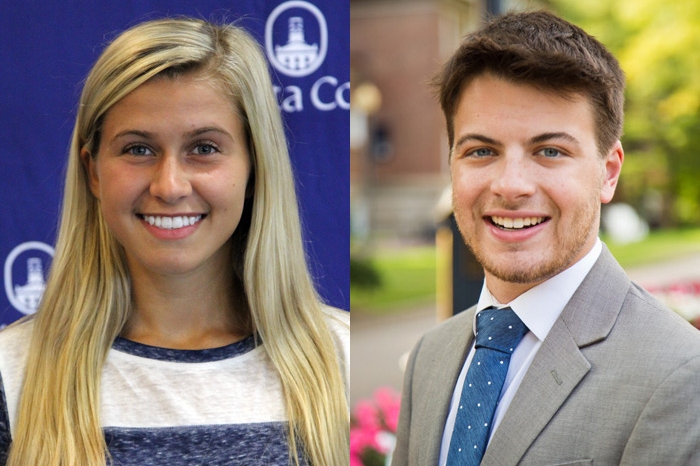 As president of their sorority and fraternity, Loren Coontz ’20 (Rootstown, Ohio) and David Erzen ’19 (Bethel Park, Pennsylvania) know the value of campus involvement at Marietta College.

Both students are also active in a variety of organizations and campus groups, including Omicron Delta Kappa.

Therefore, it came as no surprise when Coontz and Erzen were recently awarded scholarships from the Order of Omega, a Greek honorary recognizing the top 3 percent of juniors and seniors involved in Greek Life, for academic achievement, leadership and service to the campus and the local community.

“Coming in as a first-year student, I could never have anticipated the impact Greek Life would have on my college career,” said Erzen, a member of Delta Tau Delta. “From leadership opportunities, personal development, and, most importantly, the strong network of men I call my brothers, participating in Greek Life has been one of the most fulfilling experiences I have ever had.”

The scholarship itself is selective, awarded to 138 undergraduate students nationwide across 80 campuses. For this reason, Coontz, a member of Alpha Xi Delta, was skeptical about applying for the honor.

“I eventually decided I would (apply) because Greek Life has been my favorite aspect of my college experience,” she said. “Being a member of Alpha Xi Delta has helped me grow in so many ways — both personally and professionally. Being a part of Order of Omega has only solidified those feelings by giving me the opportunity to connect with other leaders to improve the community.”

Both students are highly involved in every aspect of campus life — from honorary societies to new student orientation groups.

Coontz is a member of multiple academic fraternities and honoraria including Omicron Delta Kappa, Gamma Sigma Alpha and Beta Beta Beta. She is also a mentor for Marietta’s Pioneer Pipeline program, an Excel Leader for the McDonough Leadership Program and a member of the AmeriCorps Health Professions Affinity Community.

Erzen is also a member of multiple honoraria including Omicron Delta Kappa and Gamma Sigma Alpha, of which he is vice president. Erzen serves as a HOME and Excel Leader, Student Government Association representative and a peer mentor for the Academic Resource Center.

He also volunteers his time with the Ely Chapman Middle School Program, Marietta College Concert Choir, and the Floodstage a-Capella group. In addition to Delta Tau Delta, Erzen is the Community Development Chairman of the Interfraternity Council.

“Receiving this recognition by the Order of Omega is truly an honor,” Erzen said. “Being a leader in the Greek community at Marietta College has certainly been a transformative experience, and receiving this award helps validate the work I have done.”

The scholarship is intended to fund future academic endeavors the recipient pursues. Coontz hopes to attend a physician assistant program after graduation, and Erzen will be volunteering in Africa with the Peace Corps.