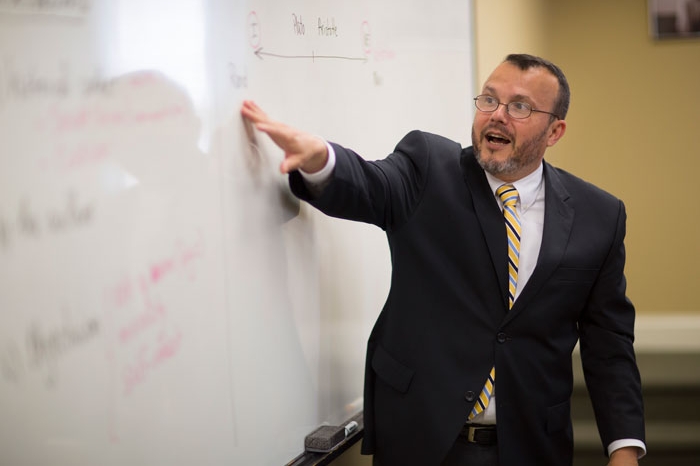 During his funeral in July 2021, colleagues and former students heaped praise on Dr. Gama Perruci for being a mentor, as well as a driving force in leadership education.

That’s why it shouldn’t be a surprise that Perruci was honored by the International Leadership Association (ILA) with a Lifetime Achievement Award during the 24th ILA Global Conference in Washington, D.C., in October.

“Gama’s leadership within ILA as an organization was instrumental in helping it grow into the thriving organization it is today,” Judd said. “I had the great pleasure of traveling with Gama to ILA conferences both domestically and internationally, and it was often like traveling with a rock star. Everyone, from academics and practitioners to students, knew who Gama was and wanted time in his light to talk about their ideas, their programs, and their leadership journey.”

Dr. Alexandra Perry, Interim Dean of the McDonough Center, was honored to call Perruci a colleague and she echoes Judd’s sentiments on his impact on ILA.

Perruci joined the College in 1999 and served as the Dean of the McDonough Leadership Center from 2003 until he passed away on July 9, 2021, after a courageous battle with cancer.

Perruci was recognized as a McCoy Professor in 2001. He also authored and co-authored multiple articles and books on leadership and leadership education, including Global Leadership: A Transnational Perspective. Perruci also co-authored Understanding Leadership: An Arts and Humanities Approach with his former colleague Robert McManus. Perruci also published Teaching Leadership: Bridging Theory and Practice with Sadhana Hall, Deputy Director of the Rockefeller Center for Public Policy and the Social Sciences at Dartmouth College.

“Gama is remembered as having a commitment to this work and to his family,” Perry said. “His legacy is apparent not only in our alumni, but across the globe in the community developers, educators, and political leaders that he mentored and taught. While Gama’s lifetime feels as if it was all too short, the work that he has done certainly seems to be more than one lifetime could have encompassed. What an honor for Gama’s family, friends, and colleagues to see his work honored with a lifetime achievement award from the ILA.”A native of Brazil, Perruci served as the Interim Provost for two years (2011-13) while maintaining an active role in the McDonough Program.

Aside from his teaching, research and administrative duties, Perruci also served as a consultant for The New York Times, focusing on the newspaper’s educational programming for leadership students. His other consulting assignments included a review of the Department of Leadership, Ethics and Law (LEL) at the United States Naval Academy (Annapolis, Maryland) and an evaluation of the leadership program at Zayed University in Dubai, United Arab Emirates.

Perruci was the Past Chair of the Board of Directors for ILA, a global nonprofit organization focused on the study and practice of leadership. He was also a frequent guest analyst for the London-based BBC World Service and Paris-based Radio France International broadcast to Brazil.

“I had the benefit of observing hundreds of interactions between Gama and our Marietta College students, I had the opportunity to see a master in action,” Judd said. “Gama could ask the right question, provide the best anecdote or quip, or suggest just the right reading or activity that would help a person feel like they had solved their own problems. Gama was literally leadership in motion at all times.”