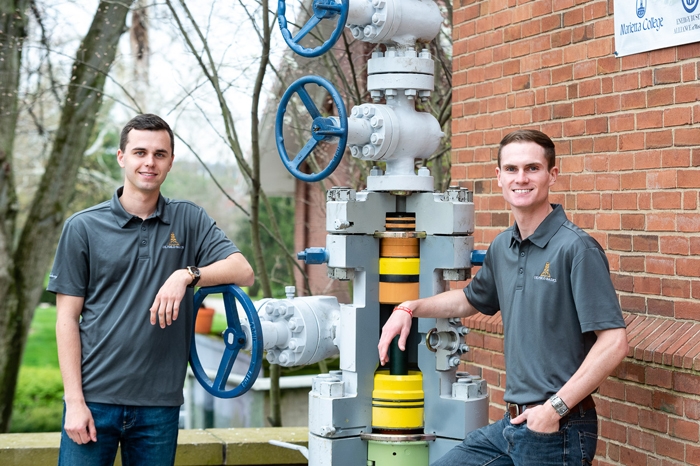 Their passion recently paid off as the two Petroleum Engineering majors won the third round of Marietta College’s PioBiz competition with their company Oilfield Basics. The judges of the “Business Plan” round awarded them $8,000 to put toward their business venture.

“Through our organizations that we have leadership positions in, we strive to educate our peers on several aspects of the industry that are not taught in our classes,” Ziaja said. “We thought of this idea over winter break and it quickly evolved due to lack of competition already in the market and our entrepreneurial minds. We felt that our start-up business was important not only for students in petroleum engineering schools, but also to a much larger audience that includes landowners, affiliated industries, and blue and white collar workers of the oil and gas industry who wish to learn more about overall operations.”

Krieg added that they believe the product is something that will help those in the industry, but also the general public.

“Many processes are inaccurately represented or are not discussed at all, so it’s not our mission to change their mind on any topics, rather provide our audience with an honest overview of these processes so that they are more informed,” Krieg said.

Both of the contestants agreed that getting the chance to share the idea in front of an audience and with feedback from three judges was an experience that they never expected as college students.

“PioBiz has been a remarkable experience and one that we couldn’t have received anywhere else,” Krieg said. “It is programs like these that truly make Marietta College stand out. Through PioBiz, Sebastian and I were able to methodically sketch out our plans for Oilfield Basics and test our concept with an audience and judges. We were also able to get help from local practitioners who helped walk us through the process of, for example, establishing our business as an LLC.”

Dr. Jacqueline Khorassani, Professor of Economics and Director of the Entrepreneurship Program, said they took a different approach to the PioBiz competition — which is in its third year — during 2017-18. Instead of an end-of-the-year competition only, this year there were three rounds that culminated with the Business Plan.

“Round 3 of the PioBiz competition requires students to prepare and present full business plans that include a market analysis along with projected costs and revenues for the next three years,” she said. “This year’s competitors had the advantage of being able to gradually develop and improve their plans based on the feedback they received from judges in previous stages of the competition.”

Ziaja said they were able to take the feedback they received throughout the year and with each stage of the competition and make their concept stronger.

“Although we didn’t win the second round of PioBiz, we received tons of positive feedback about our concept and potential,” he said. “In between the second round of PioBiz and the final round we got to work and developed a brand, Oilfield Basics. We presented all of the information that we thought was important to share at our final PioBiz competition and we ended up winning and we have an $8,000 prize to kick-start our business.”

Krieg said they are ready to move forward with their business plan.

“We determined that we will attempt to bring on outside authors to create a large library with a large range of topics in order to better appeal to our newly discovered markets,” he said. “We also concluded that we will begin filming video blogs to address common concerns and questions that would attract potential customers to our site and promote a deeper understanding of oilfield operations.”
Ziaja said they are honored to be the 2018 overall winner.

“It shows that the College gives opportunities that all students may participate in,” he said. “The PioBiz competition helped point Derek and I in the right direction and the prize money will help financially take our business one step further.”

The judges also recognized the hard work put in by the other two finalists.

Courtney Knoch ’18 (Marietta, Ohio) and Melvin Shuler ’19 (Columbus, Ohio) each received $1,000 in prize money to put toward their projects. Knoch is looking to create the Everyday Oasis Food Truck Park in Marietta, while Shuler is developing an app called WE-LYVE.

“Round 3 judges found all three presented projects worthy and promising,” Khorassani said. “However, they were particularly impressed by the amount of progress that Derek and Sebastian had made in a short period of time. They applauded Derek and Sebastian’s ability to prove their concept by actually being able to sell their services.”