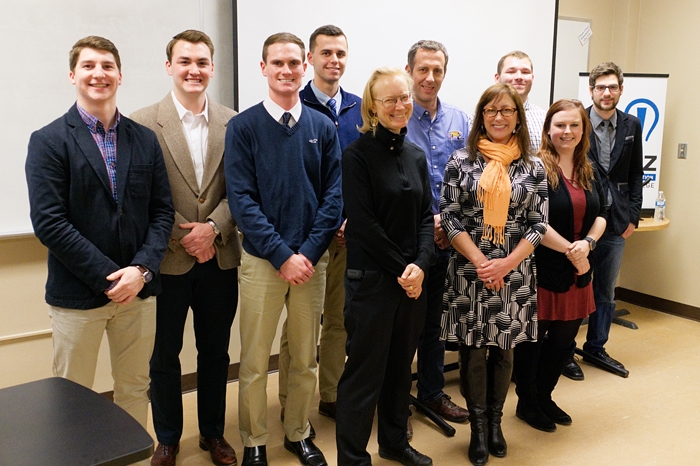 Courtney Knoch ’18 (Marietta, Ohio) has had the idea for a food truck park in Marietta for a little while.

It wasn’t until the second round of Marietta College’s PioBiz-Proof of Concept that she was confident it could work. The English major placed first in the competition and was awarded $330 to put toward her idea. She also won an additional $250 after finishing in fifth place for Bizarre Bazaar concept. The cash awards started at $250 for fifth place and increased by $20 for each place.

“PioBiz is giving me the chance to pitch a few really fun business ideas, one of which I plan on applying for the final round with,” Knoch said. “The food truck park idea has led to the planning of a food truck rally near campus, to simulate and prove my idea essentially makes sense. The Luck 13 Food Truck Rally is April 13th, with the final round of presentations happening on All Scholars Day a week later.”

The Truck Rally will be held from noon-10:00 p.m. in the College’s Physician Assistant Parking lot. Knoch said there will be a variety of food vendors, as well as live entertainment, raffle prizes, and event T-shirt printing on-site.

Knoch also got approval for a Third Street venue to open the food truck park when she’s ready.

“This will allow food trucks to congregate in one location, making them more easily found by customers and we will have a more effective marketing plan,” she said. “I am grateful for this opportunity through the Entrepreneurship program and Marietta College, and hope to showcase all the things I’ve learned and all the support I’ve had.”

Dr. Jacqueline Khorassani, Director of the Entrepreneurship Program, said the Top 5 ideas were selected by the judges — Faith Knutsen, Bryan Waller and Carrie White — as winners.

PioBiz returns with Round 3: Business Plan on April 20th, where each presenter will be given up to 10 minutes to make a pitch to the judges. Depending on the quality and financial needs of the proposed projects, up to $10,000 in cash and in-kind support will be awarded either to the top project or distributed between the top two or three projects. For more information: www.marietta.edu/piobiz.

There was a tie for second place between four Petroleum Engineering students.

Moran and Duvall didn’t take their idea too seriously when they originally crafted it.

“The project that Patrick and I started a few years back was a joke with friends, laughing at the thought of getting rides to and from the bars in a golf cart,” Duvall said. “Come senior year with more free time than we knew what to do with we thought, why not? Patrick and I have relied on the education/business skills we have received in the Petroleum program and really just let the idea speak for itself. Moving forward, we would obviously enjoy winning, but the future of BarKart is still up in the air.”

Krieg said they are grateful for the opportunity to compete in PioBiz.

“While it is still in the development phase, we have already won money to help launch our website and have gained contacts and valuable feedback,” Krieg said. “We will for sure be continuing with our business idea and are looking forward to creating our full business plan for Round 3 of the competition. Regardless of whether we win or not, the experience and feedback gained through this process will be immensely valuable in our careers going forward.”

Finishing in a tie for fifth place are Drew Layton ’19 (Whipple, Ohio) and Tyler Gutberlet with Good Gear Backpacking. This is the first year of PioBiz that Marietta students are allowed to partner with a non-student member to form a team.

“The fact the students who successfully competed in Round 2 of the PioBiz Competition have various academic interests shows that the entrepreneurial mindset is not limited to one discipline,” Khorassani said.