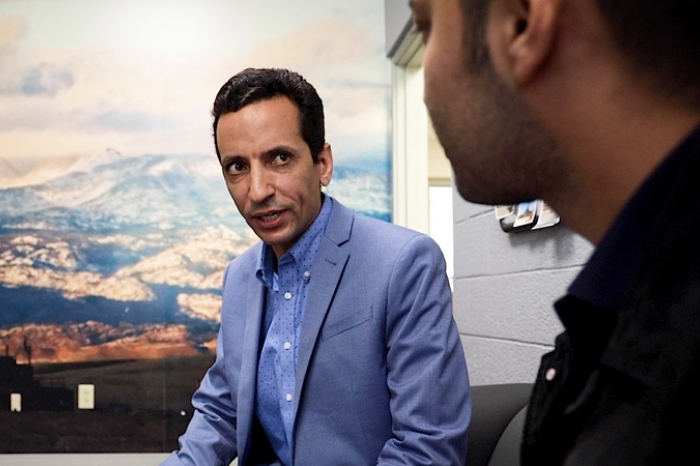 Long before the pandemic caused many internships to be canceled and impacted summer educational opportunities, Marietta’s Dr. Ahmed Algarhy, an Assistant Professor in the Petroleum Engineering and Geology Department, began developing a way for his students — and countless others around the globe — to have access to quality educational content pertaining to the oil and gas industry online.

Algarhy proposed the plan for PioPetro, a non-profit organization based at Marietta College, to President Bill Ruud and Provost Janet Bland last year as a way to collaborate with universities, petroleum companies, and oil and gas experts to deliver digital information to college students for free. This summer, PioPetro collaborated with SPE Egypt to offer an eight-week online internship to students majoring in the petroleum engineering field. The participating students were from more than 70 countries and more than 200 universities worldwide.

The eight-week summer online internships drew more than 3,500 attendees who attended webinars, took quizzes and completed the final exam. Of those, Algarhy says 45 percent of the students passed the 70 percent threshold to earn the internship completion certificate. A second eight-week online training is planned to happen during spring (February and March 2021).

“After we completed the summer training and starting in August 2020, we run two or three short courses every month ‘free of charge’ and we serve more than 3,000 trainees every month,” Algarhy says. Each course contains four to eight webinars and quizzes plus a final exam. “The plan is to serve 25,000 trainees per year free of charge worldwide.”

To provide programming content, Algarhy is joined by Marietta College faculty, Professor Ben Ebenhack, Chris Jacobs, Leanne Price and Mary Roberts, as well as faculty and professionals from the University of Houston, The American University in Cairo, the University of Missouri Science and Technology, Future University in Egypt, and also the Society of Petroleum Engineers of North America and Egypt Section.

As PioPetro’s Director, Algarhy reached out to industry experts from multinational corporations and in higher education “to persuade them to online train students free of charge.” He also spearheaded publicity for the organization, promoting it through Facebook, LinkedIn and YouTube. “Also, I lead the team of administration, sessions moderators, and graphics and media teams. We got 6,500 new subscribers in PioPetro’s YouTube channel in the last few months and also got almost the same number of followers on LinkedIn during the same period of time. On Facebook, we have more than 150,000 members in the group.”

Zachary Evans, Society of Petroleum Engineers Regional Director – North America, was one of the presenters during the summer program, introducing the topic of underground storage to the participating students. He expressed gratitude to the organizers for making the “Arab Oil & Gas Academy virtual internship a reality” in a letter he sent to Ebenhack, who is the Chair of Marietta’s Petroleum Engineering and Geology Department.

“Having participated directly as a speaker in one of the sessions, I was able to witness firsthand the overwhelming amount of participation and engagement the program generated from around the globe, and as the summer progressed I was truly amazed at how many students and young professionals were able to take advantage of this program both domestically and abroad. Given the significant decrease in traditional internships and job experience brought about by the industry downturn and public health concerns, this opportunity for students to learn and network remotely, while a windfall in any year, was especially needed in 2020. The extensive nature of the program with such a diverse range of engineering and professional topics within the oil and gas industry was remarkable and I'm sure all those who participated are better off for it.”

To sustain and grow this innovative program reaching Pioneers around the globe we are looking for corporate sponsorships. If your company is interested in partnering with Marietta College to have increased access to this highly-qualified pool of potential employees, please contact Josh Jacobs, Vice President for Advancement.