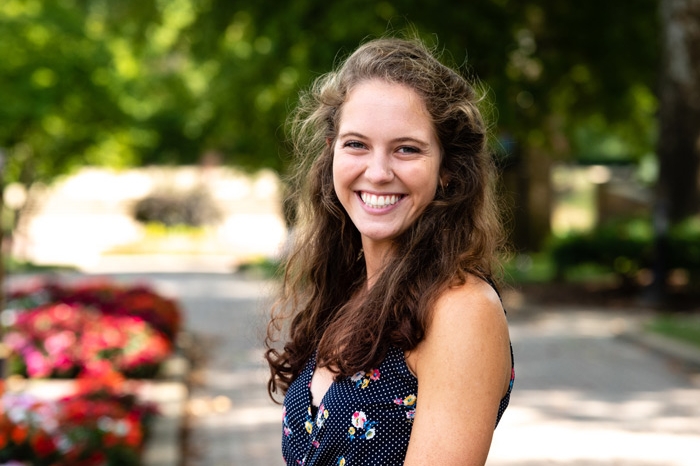 Rebecca Guhde ’23 (Signal Mountain, Tennessee) described her reaction when she learned she was the recipient of the first Virginia McCoy Scholarship, the newest Marietta College scholarship offered by members of the prestigious McCoy family.

Guhde’s scholarship will cover her tuition and housing plus any additional fees for each of her four years of undergraduate study at Marietta — a total of more than $40,000 a year.

“I can’t express enough what this means for my family,” Guhde said. “It means the world to me. My mom is a single parent and she has scrambled to provide for my sister and me.”

Guhde said her dad hasn’t really been in the picture and she, her mom and sister moved in with her grandmother some time ago. She said the house of all girls, including two female dogs, is lovingly referred to as “The Hen House” — love being the operative word.

“My grandmother is very loving but not real emotional,” Guhde said. “But when I said goodbye to leave for college, that was the first time I saw her cry.”

Virginia “Jinny” McCoy served on Marietta College’s Board of Trustees from 1996 to 2006, and was given honorary alumna status in 2009. She is a member of the Erwin Academy and has supported many College funding priorities, including the Legacy Library and The Marietta Fund.

Guhde admits she was nervous about coming to Marietta College, but after a week of spending time with other students involved in the McDonough Leadership Program, she says she already feels part of a family.

One of the things that attracted her to Marietta College was the liberal arts philosophy.

“The idea that you don’t have to declare a major right away and that you can be creative with what you want to do was a big draw,” she said.

So has she declared a major?

“I have; ironic, I know. I want to pursue Environmental Science and Political Science/Pre-Law,” she said. “I would really like to work in environmental law, where I can help to protect our national parks and fisheries and make them available to more people.”

Guhde knows a bit about our national parks. She and her sister recently spent two months “car camping” and visiting more than a dozen parks, mainly out west.

“That’s probably the best experience I’ve ever had,” she said.

Since learning of her scholarship, Guhde said she soon realized she’s part of another family: students who have received scholarships through the McCoy family.

“One of my Excel leaders is a McCoy scholarship recipient and we already talked about the expectations; it’s almost like a sorority — the older students mentor the younger ones,” she said.

Heading into the new school year, she’s relieved to have already established these bonds.

“I cannot tell you how nervous I was coming in here as the southern girl.” Pausing, she laughed and asked, “Do you all say ‘y’all’ around here?”