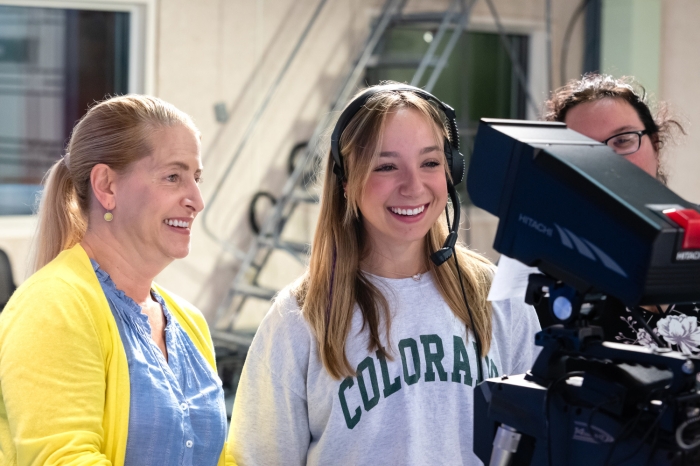 Being able to prepare students for the multi-media world of TV news and broadcasting requires outstanding faculty instruction, but also modern equipment.

Sydni Wilson ’25 learned early this fall how much of an impact the renovations to Marietta College’s WCMO-TV station really had.

“From the new furniture to the improved sets, it is amazing to see our WCMO-TV team in action,” she says. “I would go so far as to say our production has improved because of these renovations and the news stage feels much more spacious and relaxed.”

She has even noticed that more students are interested in joining the broadcasts.

“Our new TV station has brought a lot of attention to the McKinney Media Center, and for good reason,” she says. “We’ve had new journalism and broadcasting students excited to work once they got a glimpse of the set. I would like to personally say thank you to the donors and alumni who made these improvements possible.”

The College was able to make these much-needed renovations thanks to the generosity of alumni and donors who provided more than $23,000 in financial support during last February’s Day of Giving. Many of the donors were given in honor of long-time administrative assistant Joyce Pennington H’16.

Leading the charge was Renée Bailey Gallagher ’84, who matched every gift up to $5,000. Her initial match was so successful that she then agreed to match an additional $5,000 from her fellow Pioneers. She was motivated to help after running into Joyce Pennington at Homecoming 2021.

“My first meeting as a member of the MCAA Board was at homecoming, and I went to an event at the diversity house, and Joyce Pennington welcomed me like an old friend,” Gallagher says. “I was an English major, but I got exposed to the mass media department and only knew Joyce from those experiences. However, for her to remember me 30 years later and greet me like that just warmed my heart, and that’s what makes Marietta special.”

While honoring Pennington played a critical role in driving alumni to give back, many of the donors were also motivated by messages that showed how some equipment had not been replaced since they were students in the 1990s.

This also resonated with Gallagher, who heard about the deteriorating equipment during a Connect Four event hosted by the MCAA.

“There was an alumna who was about to start a new job with NBC, and she made a joke about how old the equipment was,” Gallagher says. “I thought to myself that we have to do something to help. Just by upgrading the studio, and it desperately needed it, the students who gain experience there today will go out into the workforce and be qualified. Marietta doesn’t only prepare you academically but prepares you with real-life skills. This is what Marietta has always promised and what we knew as students.”

Marilee Morrow, Professor of Communication Studies, says the last improvements in the studio were a digital upgrade in 2008.

However, the sets were too expensive to replace, so the old ones were painted. With the funding in hand, Morrow worked with a design firm to provide three renderings of a new set, and she was able to order some much-needed equipment.

The renovations were completed in the summer, and the new sets have energized the students.

“I have to say the improvements made to the studio give it a real-life effect and makes the experience so much more thrilling,” says Hailey Lanham ’25. “I was more than happy to be a part of the remodel and I had lots of fun painting and moving stuff around to make it feel more welcoming. The colors in the studio are so much more vibrant and exciting. With the new set up and news desk it enables students to dress professionally and get hands-on, real-life experience for their future careers. I think it is important for everyone to get a chance to experience each responsibility on a set at least once. The more knowledge you have, the more eligible you are.”

Morrow said there are still additional needs with studio equipment and set up, therefore, alumni who still want to make a gift to the project can do so at www.marietta.edu/give.