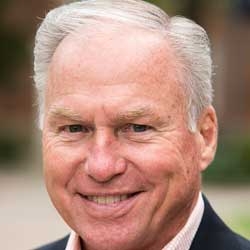 Jack Hopkins is the founder of Jack Hopkins Consulting Services, LLC. The former President/CEO of the Kalamazoo Community Foundation, having retired after 25 years with the Community Foundation in 2008, previously served as president of Nazareth College (Michigan) and chaired the Communication Department of Hope College (Michigan). He served as a Senior Advisor to FSG (Boston, Massachusetts) from 2009-12 and during 2009-10 served as Acting Executive Director for CF Insights, a division of FSG. Throughout his professional career he has worked with non-profit and foundation boards; presented at numerous philanthropic, educational and community and economic development conferences; consulted with community foundations throughout the U.S. and with small and international businesses and non-profit organizations, authored numerous professional articles and also owned both residential and commercial real estate.

Locally, Hopkins has served with numerous nonprofit organizations recently devoting his time to those dedicated to enhancing the community and economic vitality of the area with recent and particular focus also upon the issues of homelessness. He currently serves on the board of Downtown Tomorrow, Inc. and recently also served on the boards of Southwest Michigan Innovation Center, the Western Michigan University Theatre Guild and Ministry with Community for which he successfully co-chaired a $6 million capital campaign to fund the construction of a new home for the community’s only daytime homeless shelter.

After graduating from Marietta and receiving the Adair and Jewett prizes in 1965, Jack earned his master’s degree in Speech Communication (1966) and doctoral degree in Interpersonal and Organizational Communication (1970) from Ohio University. He received honorary doctorates in humane letters from Nazareth College (1990) and humanities from Marietta College (1991). Also in 1991, he served as a visiting scholar at Marietta College. In 2008 he was named a Distinguished Alumnus by Marietta College; received a Community Development Hero Award by LISC; upon his retirement in 2008, the Board of the Kalamazoo Community Foundation named the Jack Hopkins Community Redevelopment Fund in his honor and in 2019 received the prestigious Red Rose Award from the Rotary Club of Kalamazoo in which he served as President in 1985-86.

Jack and his wife, Andy, live in Kalamazoo. They have three sons and 11 grandchildren.