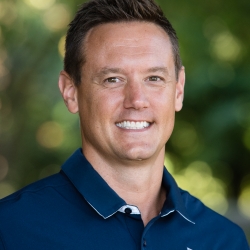 Since arriving at Marietta College in 2007, Jon VanderWal has proven he can build a championship-caliber program, recruit with the best in the nation and draw up a game strategy that has led to 211 victories over the past 11 seasons. VanderWal also guided the Pioneers to four consecutive Ohio Athletic Conference championships from 2015-2018 — the first time that has ever been accomplished in the conference.

VanderWal’s impact on Marietta College basketball has been nothing short of remarkable. He has led the Pioneers to five OAC regular season championships, three OAC Tournament championships and six appearances in the NCAA tournament — including a run to the Elite 8 in 2014-15. The Elite 8 team set a school record by winning 21 consecutive games to open the season and finished with a 28-4 record (also a school record).

In the opening round of the NCAA Tournament, the Pioneers rolled to a 120-81 victory over Medaille (N.Y.) College. In the second round, Marietta hosted the College of Wooster and pulled out an 88-86 win on a late shot. Advancing to the Sweet 16 in Rock Island, Ill., Marietta rallied to defeat St. Olaf (Minn.) College 79-72 before falling to Augustana (Ill.) College in the regional final.

In 2010-11, VanderWal’s coaching style and recruiting prowess were on full display as the Pioneers went 27-4 and won the regular season conference championship — the first since 1974-75 and the first tournament crown in school history. That team also went on to reach the Sweet 16 and ignited the passion you see at every game at Ban Johnson Arena.

Kevin Knab, one of VanderWal’s first major recruits, believes his former coach has many more great memories and moments to deliver for Marietta College.

“When you play for Coach VanderWal you expect to work hard and compete every day because he wants to win conference championships, but he also has his sights set on winning a national championship,” Knab said. “It’s also important to know that you also get a coach off the court who is supportive of your academic pursuits and cares about you as a person. It was an honor to play for Coach VanderWal.”

Reaching the 20-win plateau has become a common theme during the VanderWal era. From 2010-18, the Pioneers are averaging nearly 23 wins a season, including a second run to the Sweet 16 in 2016-17.

Now Marietta College is considered a front-runner for the conference title every year, and this season won’t be any different. Why? Because VanderWal has recruited some of the best talent of any Division III program in the nation.

VanderWal has been recognized for his winning ways. He was named the recipient of the Glenn Robinson Award, presented annually to the top Division III coach in the nation, in 2015.He was named the OAC and NABC All-Great Lakes Region Coach of Year in 2015 and 2011. He has also coached 24 All-OAC performers, eight All-Great Lakes Region players and one All-American. Three Marietta players — Trevor Halter (2010-11), Garrett Stephenson (2014-15) and A.J. Edwards (2015-16) — were selected OAC Player of the Year during VanderWal’s time at Marietta.

You could argue that no other coach — on any level — has done a better job in the nation since his arrival. The five years prior to becoming a Pioneer, Marietta College basketball won just 25 percent of its games (32-96). From 2010-16, the Pioneers have won 79 percent of their games (136-36).

How VanderWal has rejuvenated Marietta College’s basketball program is just a small part of what makes him one of the best coaches in all of college basketball. Jon and his coaching staff have built a family at Marietta.

“Our players know we are going to work them as hard or harder than any other program in the country because we want to be the best,” Coach VanderWal said. “But they also know we will be their biggest supporters on campus and after they graduate. We care how they are doing in the classroom and what is going on in the life. Playing at Marietta College means joining a new family.”

VanderWal, a former Albion (Mich.) College standout and Ohio Wesleyan University assistant, is the 15th coach since the program began in 1901-02. His duties with the Battling Bishops included head junior varsity coach, recruiting coordinator, strength and conditioning coach and academic coordinator. Ohio Wesleyan, who went 18-10 in 2006-07, finished third in the North Coast Athletic Conference (NCAC) during the regular season and advanced to the championship game of the NCAC Tournament.

The Cadillac, Michigan, native is a member of the National Association of Basketball Coaches (NABC). He has worked a variety of summer basketball camps throughout the region over the past 15 years, and he is the director of the Marietta College Pioneer Basketball Camp each summer.

VanderWal and his wife Tera live in Marietta with their daughter Kendall and son Trey.