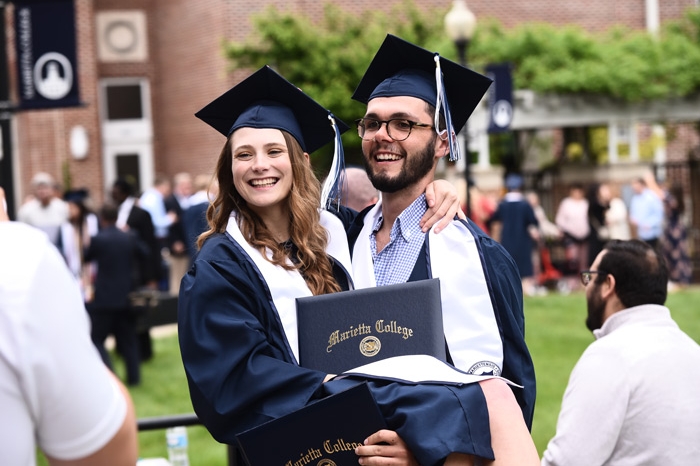 Barbara Fitzgerald ’73 enjoyed sharing stories about her career, her travels around the world, and her strong connection to her alma mater during Marietta College’s 182nd Commencement ceremony on Sunday, May 5.

In the end, though, what she stressed most was a friendship she made during her first week on campus in the Fall of 1969.

“I met someone who has been my best friend ever since — Beth Thompson Miller ’73. Through college and all the years since then, and despite living apart, we have shared our lives more closely than if we were sisters,” Fitzgerald said. “For our friendship, I am certainly lucky and forever grateful I made the decision to attend Marietta College. Hopefully, your college experience included friendships such as ours.”

Fitzgerald, who served the College on its Board of Trustees over the past 14 years, maintains a strong connection to her alma mater — and this year’s graduates.

“As a student, I doubt I worked as hard as all of you did these last four years. And I’m certain there are many of you with significantly greater academic achievements than I had,” she said. “But I do share a sense of this place and the people who make it special. The faculty and staﬀ who are accessible and interested and care deeply about you. The administration and trustees who work really hard to make the best decisions to enhance the academic, athletic and living environment for everyone. And the ability of Marietta College to bring students together in a community of friendship and support.”

“Barbara Fitzgerald has been a loyal and dedicated supporter of Marietta College, and it was an honor to have her as our Commencement speaker this year,” Ruud said. “We will miss her experience and strong opinions about the future of the College as a member of our Board, but we’re glad she committed herself fully for the past 14 years.”

Marietta College welcomed approximately 200 graduates into The Long Blue Line as President Ruud and Provost Janet Bland handed out diplomas in front of more than 1,500 family and friends at the Dyson Baudo Recreation Center.

The Jewett Orations, which remain a traditional part of Marietta’s Commencement, was won by Cameron Dowiak (Burgettstown, Pennsylvania), who earned a Bachelor of Science degree in Biochemistry, with “I Hope.”

“Turn on the news. Take your pick: are you in the mood for injustice, hate, violence, war, the climate. There is so much that is broken, it’s hard not to turn it off. But I am encouraged looking in the eyes of my classmates. Because I see a generation that has had enough of a broken status quo.,” Dowiak said. “My challenge to you is this: find what bothers you. What is your moment that shattered you? And what are you going to do about it?”

For Dowiak, it was switching her major to Biochemistry, taking a semester off researching mental health, and becoming an EMT so she wouldn’t have to wait to be a doctor to start serving rural folk through medicine.

“That’s really what our diplomas represent. Yes, it’s the completion of 120 credits with a satisfactory GPA, right Dr. Bland?” Dowiak said. “But it truly stands for triumph over every moment that has shattered you and transformed you. And those are beautiful, beautiful moments. Treasure them. Treasure your diploma. Hang that thing on the wall and let it stand for the problem in the world you now have the tools to tackle. And treasure who you are right now. Because it’s about to all change again, and this time, I hope it does.”

The second-place Jewett Oration was “Feeling Like A Fraud” by Tristan Bailey (Massillon, Ohio), who earned a Bachelor of Science degree in Petroleum Engineering.

“Now it may seem like I’ve just been complaining about my struggles throughout college and my future for the last few minutes, but I’m talking about it because I know I’m not the only one,” Bailey said. “All of us are going into uncharted territory. It’s normal to feel lost or like you’re somewhere you don’t belong. Know that you’re not alone and that no matter how much we tear ourselves down we are prepared to thrive.”

The Class of 2019 honored one faculty member — Dr. Heather Sowards, Visiting Assistant professor in English, as she was presented the Outstanding Faculty Award.