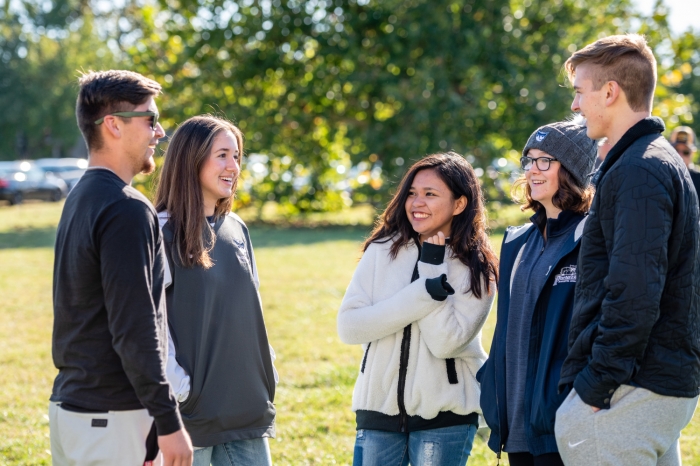 Ever since Gabe Brunck ’23 (Pittsburgh, Pennsylvania) visited Marietta College’s campus and met some players from the men’s lacrosse team, he was on a mission to attend one of the nation’s top liberal arts colleges.

“This is actually the only place I came to look, and when I saw the campus, I didn’t want to go anywhere else,” said Brunck, who is majoring in Psychology. “Then I met the players and it just topped everything off.”

With his heart set on becoming a Pioneer, Brunck was almost in shock when he discovered he would be a member of the inaugural class of Charles Sumner Harrison Scholars — all five students received full-tuition scholarships.

“It was unreal,” he said. “It was a blessing from God. It was not something I was expecting.”

That was the sentiment shared by all of the recipients, who all started this fall.

“Once I left campus after my visit, I knew Marietta is where I wanted to be, but honestly, I couldn’t afford it. I saw the Charles Sumner Harrison Scholarship and I said let’s go for it,” said Anna Frost ’23 (Norwich, New York), who is majoring in both Political Science and International Leadership. “I got it and that made going to Marietta College a reality.”

The other Harrison Scholars are Hannah Jamelo ’23 (Belpre, Ohio), Emi Reindle ’23 (Lancaster, Ohio) and Artemii Stepanets ’23 (Suyda, Russia). In the past, the College offered the Harrison Scholarship, but the amount ranged from $1,500 to $2,500 annually.

“We wanted to promote social justice and inclusion in our campus community. The decision to increase the scholarship to full tuition is directly related to the value Marietta College places on this work in our community,” she said. “The Charles Sumner Harrison Scholars will be leading and participating in this important work, and they will serve as mentors to other students on campus.”

Reindle is the perfect example of a Harrison Scholar. During her sophomore year of high school, her mother was diagnosed with breast cancer. Scared and uncertain of the future, Reindle felt she had to be the rock of the family — especially for her two younger brothers and one younger sister.

“While we were going through my mom’s diagnosis, I wasn’t performing to the best of my ability and I knew things had to change,” she said.

So, she got heavily involved with Fairfield Medical Center and started her own non-profit — Screens for Teens.

“I partnered with the local hospital and local schools about being proponents of early detection,” Reindle said. “Also, this gave me an opportunity to speak about my feelings and realize I wasn’t going through this alone. That other kids like me had family members battling cancer.”

Now, Reindle is focused on becoming a pediatric oncologist.

“I’m putting myself through 12 more years of school,” she said. “I can connect with children more than an adult and that will be more beneficial when they are going through treatments.”

Stepanets and Jamelo had different routes to Marietta College. Both were born in foreign countries and eventually moved to the U.S.

“I grew up in a poor town,” said Stepanets, who was born in St. Petersburg, Russia but lived in Suyda. “Not American poor. Russia poor.”

However, Stepanets said his mother sacrificed a lot to help him and his brother to leave Russia and study at the Academy at the Lakes in Land O’ Lakes, Florida.

“It was an extraordinary opportunity,” said the Petroleum Engineering major. “There are no economic opportunities in Suyda. Ever since I came to the U.S., I have seen this as a great opportunity.”

During his senior year, Stepanets was hoping to earn a scholarship at one of his top choices. Then he heard back from Marietta.

“I knew I’d be going to a college in the U.S., but I never thought it would be at a place as marvelous at Marietta,” he said. “When I got the email that I received the Harrison Scholarship, I read it three times to make sure and then I tackled my guardian. That was the moment I knew my American dream was going to continue.”

Jamelo is also majoring in Petroleum Engineering. She was born in Tarlac City, Philippines, and raised in Bulacan, Philippines, but in March 2018 she moved to Beverly, Ohio, which is about 15 minutes from Marietta’s campus.

“I was a senior in high school and everyone was preparing for college. I had tried to apply for any scholarships, but I didn’t qualify because I had not been in the U.S. long enough,” she said. “I wanted to go to an actual college, but I knew we might not be able to afford it, so my parents and I had decided it might be better to take online classes because I didn’t want to be a burden on my parents. I remember one night as I was in my room I cried and prayed about getting into a great college. I didn’t want to put this burden on my parents.”

An outstanding student, Jamelo received an email from her high school guidance counselor that Marietta College wanted her transcripts. Then her dad got an email about competing for a scholarship.

“The competition was for a full-tuition scholarship. Sign me up,” she said. “I was very nervous, though. I had been in the U.S. for less than a year and English is not my first language.”

She excelled and learned a few weeks later that she received the Harrison Scholarship.

“I knew we couldn’t afford college, but I was going to go to college and get a four-year degree,” she said. “The Harrison Scholarship is allowing me to earn that degree at an amazing place like Marietta.”

Frost had never even heard of Marietta College until she received a letter from the College’s Admission Office, which targeted students who attended a Hugh O’Brian Youth Leadership Conference.

“It said Marietta had a Leadership Program, so that interested me, and I decided to apply,” she said. “I visited with my mom and I knew, no matter what, I had to go to Marietta. Everyone was so nice and I just felt like I found my home. On the drive home, my mom realized how much I loved Marietta College but she’s a single mom and we have to consider the financial side to any decision.”

It wasn’t long after that drive that she got word about the Harrison Scholarship.

“My mom and I may have cried a little bit,” Frost said. “I feel really calm and at peace here. I finally fit in somewhere and I finally have a home. I’ve never had these many friends before and I love it.”

Hard work and determination are shared characteristics of the five Harrison Scholars.

Brunck, who plans to earn a Ph.D. and become either an organizational psychologist or sports psychologist, worked two jobs over the summer. He said that prepared him for the start of his first semester.

“For the first week, I was in EXCEL (Leadership orientation), and it was non-stop from 7 a.m. to 11 p.m. I wasn’t expecting that,” he said. “But it wasn’t too hard for me to adjust because I worked as a farm supervisor and I closed at Taco Bell as a supervisor during the summer.”

Brunck said he has spoken with the other recipients and they are all honored to be the first Harrison Scholars.

“All we want to do is make our professors and alumni proud,” he said.