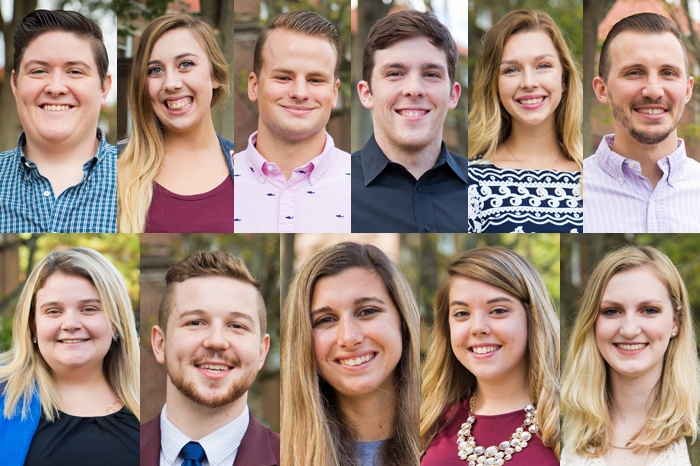 Marietta College’s student body will begin voting for the 2017 Homecoming queen and king on Thursday, October 19th during the lunch and dinner hours at Gilman Dining Hall.

Winners will be announced at Don Drumm Stadium during halftime of the Pioneers’ football game against Heidelberg University on Saturday, October 21st. Kickoff is scheduled for 1:30 p.m.

Jorden Evans (Pomeroy, Ohio) — Evans is a Liberal Arts major with a focus in Early Childhood Education, History, and Theatre. She said she has enjoyed spending the last four years on the sidelines cheering on the Pioneer football and basketball teams. This year she has enjoyed being a foster sister for two of the Pioneer football players. She has worked as a Student Ambassador in the Office of Admission for the past two years. Outside of the College, she also works for the Marietta Dance Academy, where she teaches introductory dance to preschoolers.
Nominating organization: Cheerleading
Escorts: Debbie Wayland (mother) and Taylor Werry (cousin)

Belle Huffman (Waterford, Ohio) — Huffman is majoring in Biochemistry. She is currently the Alpha Xi Delta Chapter President and has also served as Chapter Life Vice President and Song Leader. She is the Finance and Logistics Director of St. Jude Soldiers and a student worker for the Center for Health and Wellness and ARC. Huffman served as a Student Orientation Leader for three years so that students, like herself, could find their home at Marietta College. She enjoys doing undergraduate biochemistry research, Chemistry Club, dancing and attending sporting events. She also conducted a project in the College’s Investigative Studies program.
Nominating organization: Alpha Xi Delta
Escorts: Doug ’92 and Laurene ’91 Huffman (parents)

Kali Miller (Carlton, Pennsylvania) — Miller is a Petroleum Engineering student who is heavily involved in student organizations. She is currently serving her second term as the president of Chi Omega as well as serving as the president of Society of Women Engineers. She is also a member of SPE, AADE and Pi Epsilon Tau.
Nominating organization: Chi Omega sorority
Escorts: Scott & Melissa Miller (parents)

Ali Prologo (Canfield, Ohio) — Prologo is majoring in Athletic Training. She said she has enjoyed her time at Marietta College so much that she considers it her second home. She has had the fantastic opportunity to be involved in the athletic training program and work directly with athletes on campus. This past summer, she was an intern with the Vanderbilt University Sports Medicine staff in Nashville, Tennessee. Before going off to grad school for research purposes in athletic training, she plans on enjoying her last softball season with Coach Jeanne Arbuckle and her teammates.
Nominating organization: Athletic Training Student Organization
Escorts: Dominic & Kerry Prologo (parents) and Lisa Babbaro (aunt)

Courtney Streeter (Washington, Pennsylvania) — Streeter is majoring in Early Childhood and represents MCTEA (Marietta College Teacher Education Association). Streeter is a sister of Alpha Xi Delta where she serves as the Philanthropy chair for Autism Speaks. She is also a member of Kappa Delta Pi which is the education honorary. Courtney believes committing to Marietta College four years ago was the best decision she ever made because she said she is leaving with memories that will last a lifetime.
Nominating organization: Marietta College Teacher Education Association
Escorts: Debbie & Eric Streeter (parents)

Allison Watkins (Parkersburg, West Virginia) — Watkins is a Spanish and International Leadership major. After crossing the river from West Virginia, she instantly fell in love with the community of Marietta and the College. She is thankful for the opportunities that she has had over the past four years, including internships, service opportunities, and the chance to study abroad in Spain last fall. She is the president of the Sigma Kappa sorority.
Nominating organization: Sigma Kappa sorority
Escorts: Kevin & Stacey Watkins (parents) and Addison Watkins (sister)

Gabe Crowe (Springfield, Ohio) — Crowe is an International Business and International Leadership Studies double major with a minor in Entrepreneurship. He is a brother of Alpha Sigma Phi fraternity and has held executive positions in his fraternity, as well as an Interfraternity Council representative. He works in the Legacy Library Special Collections and at the Marietta College Police Department. He is involved with the Entrepreneurship program and is a McDonough Scholar.
Nominating organization: Alpha Sigma Phi
Escorts: Emily Toppin (girlfriend) and Joseph Bradley (brother in Alpha Sigma Phi)

Martin Hall (Toney, Alabama) — Hall is a representative of the Scholars Community and an economics major. He said Marietta has been an incredible experience of personal growth, and it has been a rigorous experience academically, but immensely enjoyable thanks to the friends he has made along the way.
Nominating organization: Scholars Community
Escorts: Cody Alderman and Emily Vigue (friends)

Garrett Legraen (Whipple, Ohio) —  Legraen is a member of The Alpha Tau Omega Fraternity and is majoring in Biology. He actively participates in philanthropy within his fraternity, raising money for MS by participating in the MS 150-mile bike ride and cycle for MS on campus. Legraen also is active with Alpha Xi Delta Sorority. He was awarded “The Xi Man of the Year” and has helped raise money for Autism Speaks by being a representative of the sorority. Legraen said Marietta College has provided an excellent education along with amazing new relationships and opportunities.
Nominating organization: Alpha Tau Omega
Escorts: Connie Legraen (mother) and Julia Brooker (grandmother)

Jonah Mitchell (Delaware, Ohio) —  Mitchell is majoring in both Political Science and History, while also minoring in Leadership. He has been a member of Delta Tau Delta for four years where he has served as the Corresponding Secretary and Pledge Educator. This is his fourth year serving on Student Government, and he has also been a Resident Assistant for three years. He has managed the Pioneer Pipeline website for the past three years. He is a member of the Sigma Alpha, and Order of Omega Honorary Societies, as well as the President of Phi Alpha Theta honorary society. In addition, he also helps with St. Jude and volunteers at Campus Martius. After he graduates, Mitchell will be attending law school.
Nominating organization: Delta Tau Delta
Escort: Shannon Garrison (of Alpha Xi Delta Sorority and longtime girlfriend of the candidate)