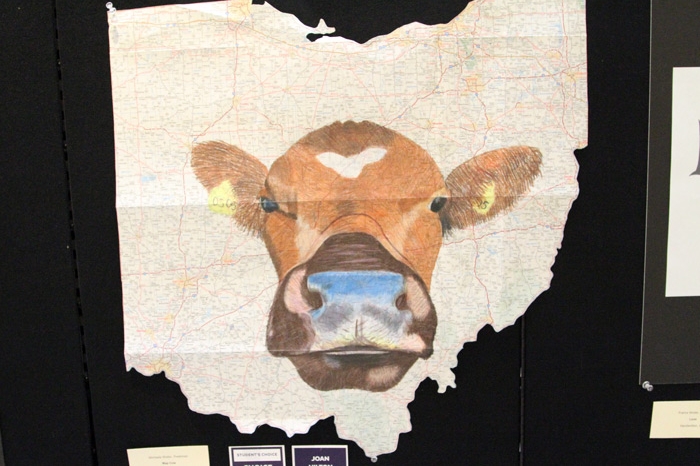 The Marietta College Art Department announced the winners of multiple awards during the opening reception of its annual Juried Art Show.

Among the winners was Leah Seaman ’21 (Philippi, West Virginia), who won Best in Show for her piece titled “How Are You Feeling Today?”

At first glance, the piece displays four separate emotions — surprise, anger, happiness and sadness, but upon further inspection shows the intricate detail of the canvas, including the tiny designs of each earring.

“This was something I did intentionally,” Seaman said. “I wanted my audience to take the time to explore the canvas, discovering new highlights, shadows, edges, and colors of every earring. I hoped that they would really pause and spend long moments with the piece.”

The piece was created in an attempt to connect her passion for art with her grandmother, a world traveler and collector of beautiful trinkets — specifically clip-on earrings.

“I took the closest memento I had of her and tried to use them in an interesting and expressive a manner possible in this painting,” Seaman said. “I wanted to have fun with my grandmother’s clip-on collection, creating something both humorous and beautiful, which is how I created the four different emotions with gold, silver, black, and multicolored earrings. Being awarded Best in Show brings me so much joy because it means the jurors spent time with the emotions and earrings, connected with them in some way, as I had hoped my audience would.”

Along with Best in Show, Seaman was also awarded Best in Painting/Printmaking for “A Commentary on Sexuality.”

Honorable mention for the Best in Painting/Printmaking went to France Moise ’20 (Naples, Florida) for her piece titled “This is Me.” Moise was also the only student to be included in the Circle of Excellence.

Other winners included Best in Drawing/Flat Design awarded to Ian Darling ’21 (Colorado Springs, Colorado) for “Totem of Leadership.” Darling was also awarded the President’s Choice Award for the same work, alongside Maria Mudre ’19 (New Albany, Ohio) for her teaching aid project. Honorable mention for Best in Drawing/Flat Design went to Mollie Swygart ’22 (Lewistown, Ohio) for “Girl in a Map.”

The Provost Choice was awarded to Megan Horsley ’19 (Millersburg, Ohio)  for her piece  “Planets and Gods.”

Each year, the Juried Art Show provides students an opportunity to showcase their work to the public. The exhibition features drawings, paintings, prints, graphic designs, and flat and solid design projects created by students since February 2018.