Champion of the Arts

Champion of the Arts

Sitting on the bricks lining Putnam Street, Music Education major Calaya Rake ’20 staples a couple hundred small handwritten notes to a poster board shaped like a tree. She gives each one a quick read, followed by a smile, as she finds an open area on one of the branches.

As chair of the Arts Education Advocacy Committee for the first ever Brick Street Arts Bash, Rake asked guests who visited the 12-hour festival to jot down why the arts are important to them.

“My favorite one says, ‘I love the arts because words complicate things,’ ” she says. “I also love watching the little pictures that the young children make for the board. They take their time and are so creative and sweet.”

The brainchild of a group of Marietta College students — most of whom are involved in the music department — the Brick Street Arts Bash was held in downtown Marietta in mid-April and showcased dozens of musicians, visual artists, dancers and actors to countless patrons drawn by the opportunity to celebrate a variety of creative talents. The students worked under the guidance of Associate Professor Marshall Kimball, the McDonough Leadership Program and Leader-in-Residence Donna Collins, who is also the Executive Director of the Ohio Arts Council (OAC).

“Marietta students began working on this in September,” Collins says. “It started with them dreaming up ways to promote the arts, possibly having workshops; and then it grew from there into a 12-hour festival showcasing the creativity, innovation and talent of students in the region and of professional artists.”

The responsibilities the students undertook were as varied as the types of artists featured during the actual event.

“We initially received a $4,000 grant through the McDonough Foundation, and that was our entire budget,” Kimball says. “The students knew that, for what they wanted to accomplish, that wasn’t going to even come close to covering it, so they started writing grants. A lot of people and organizations stepped up to (financially) make this day happen. The students really worked their tails off to put it all together.” 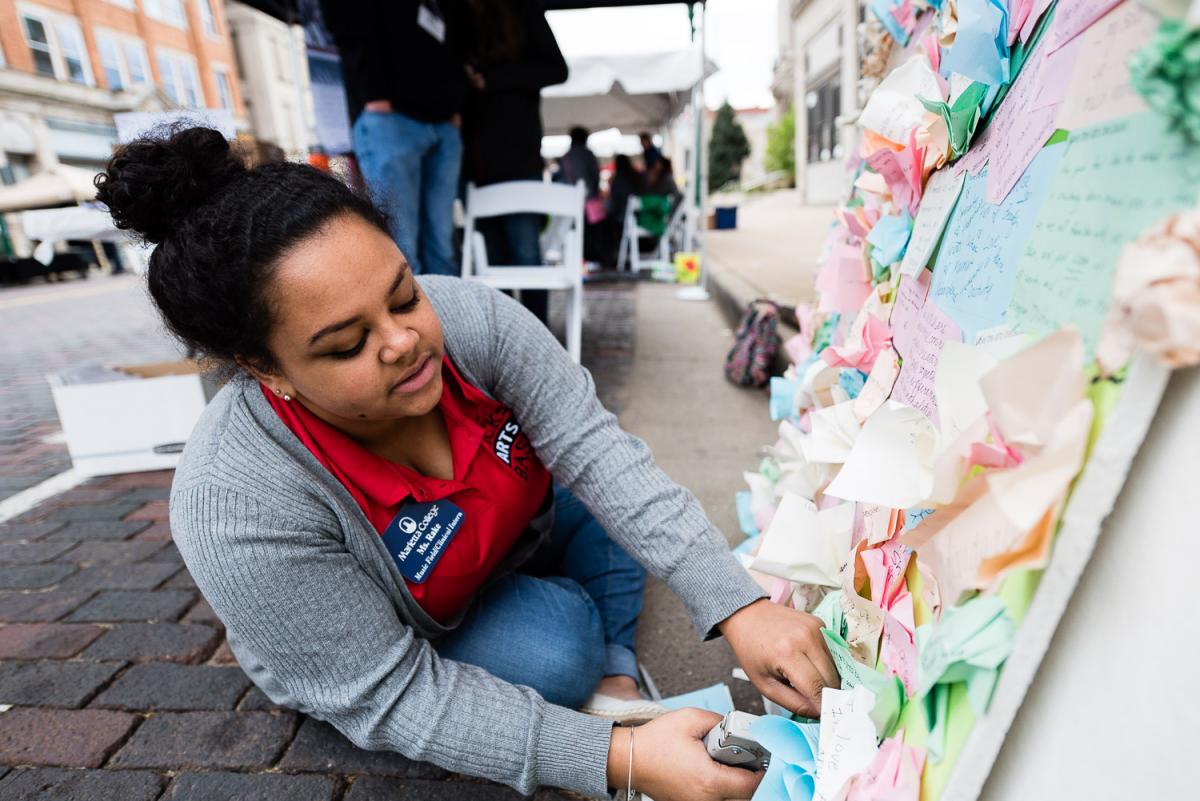 Kimball says 14 students were part of the Leader-in-Residence team. An additional 100 student, faculty and community volunteers were also involved in the planning and event hosting, supporting the 39 displaying arts and 150 performers featured during the bash.

Marietta College, the McDonough Leadership Program, OAC, Peoples Bank and Peoples Bank Theatre were the primary sponsors for the festival.

If the months preparing for the event were a marathon, then the early morning hours leading up to the opening of Brick Street Arts Bash were definitely comparable to a 100-meter dash.

Just before 6 a.m., student organizers, Kimball, Collins, workers from the city’s Street Department and other volunteers began setting up pop-up tents in case Mother Nature delivered what forecasters were predicting: cold and rain.

By 9:30 a.m., a stage was built, artists were in place, food trucks were parked and ready, and the Peoples Bank Theatre was gearing up for performances by the Marietta Children’s Choir and the Parkersburg High School A Capella Choir, the first acts of the day.

“When Donna and I were on stage about to introduce the (Marietta) Children’s Choir, I looked over at her and said, ‘This is really going to happen.’ That was a very proud and exciting moment for me,” Kimball says.

Theatre majors Morgan Thompson ’18 and Colin Rhodes ’17 smiled as they showed a group of children their stage swords and demonstrated how they choreograph fights for the theatre.

“I think the arts haven’t gotten enough representation in today’s society,” Rhodes says. “Without the arts, life is pretty bland. Seeing all these artists together and these people showing interest in the arts is great.”

The Brick Street Arts Bash highlighted artistic talents, exposed visitors to a variety of artistic mediums, and allowed artists and patrons to discuss the arts.

“When I was a junior in high school, the money ran out and they shut down our music program, art and home (economics) because people didn’t see them as a necessity,” Thompson says. “I couldn’t believe they were trying to take away this thing I love. (The Brick Street Arts Bash) allows us to make connections with the community to show how the arts influence everything.”

Both Thompson and Rhodes plan to work in the theatre after earning their degrees from Marietta. 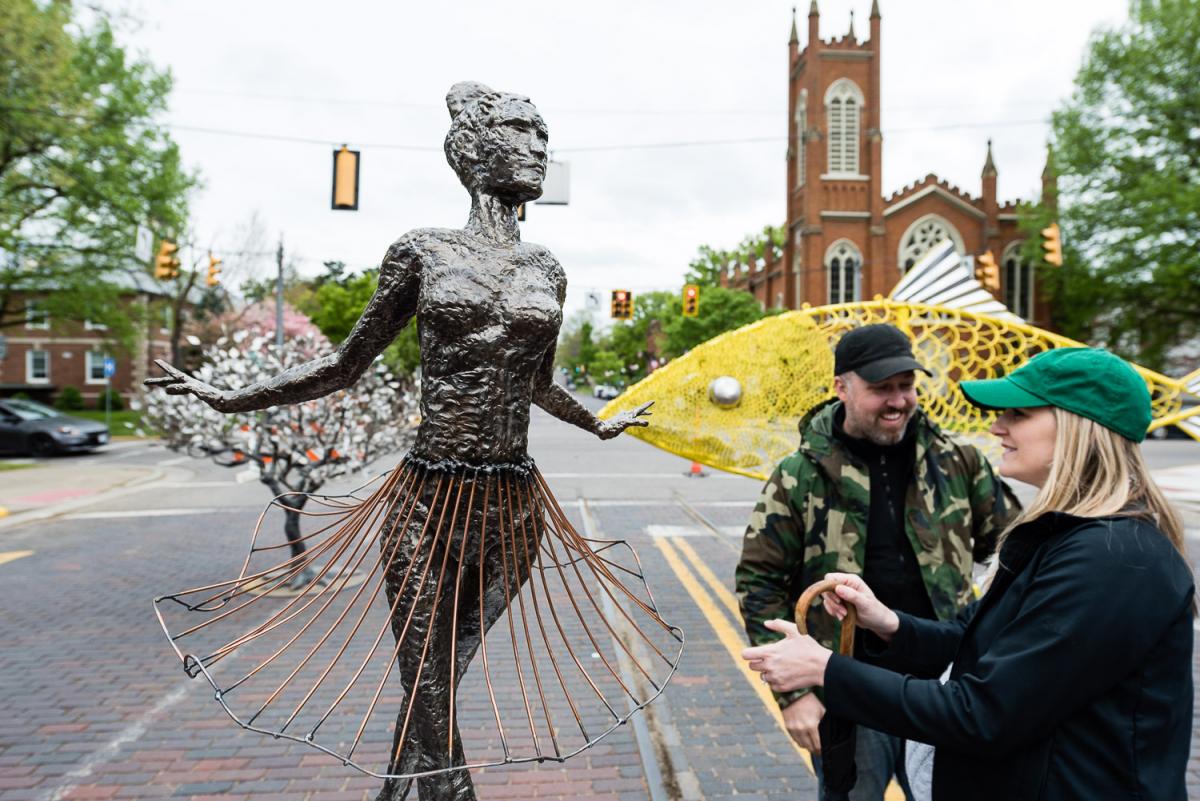 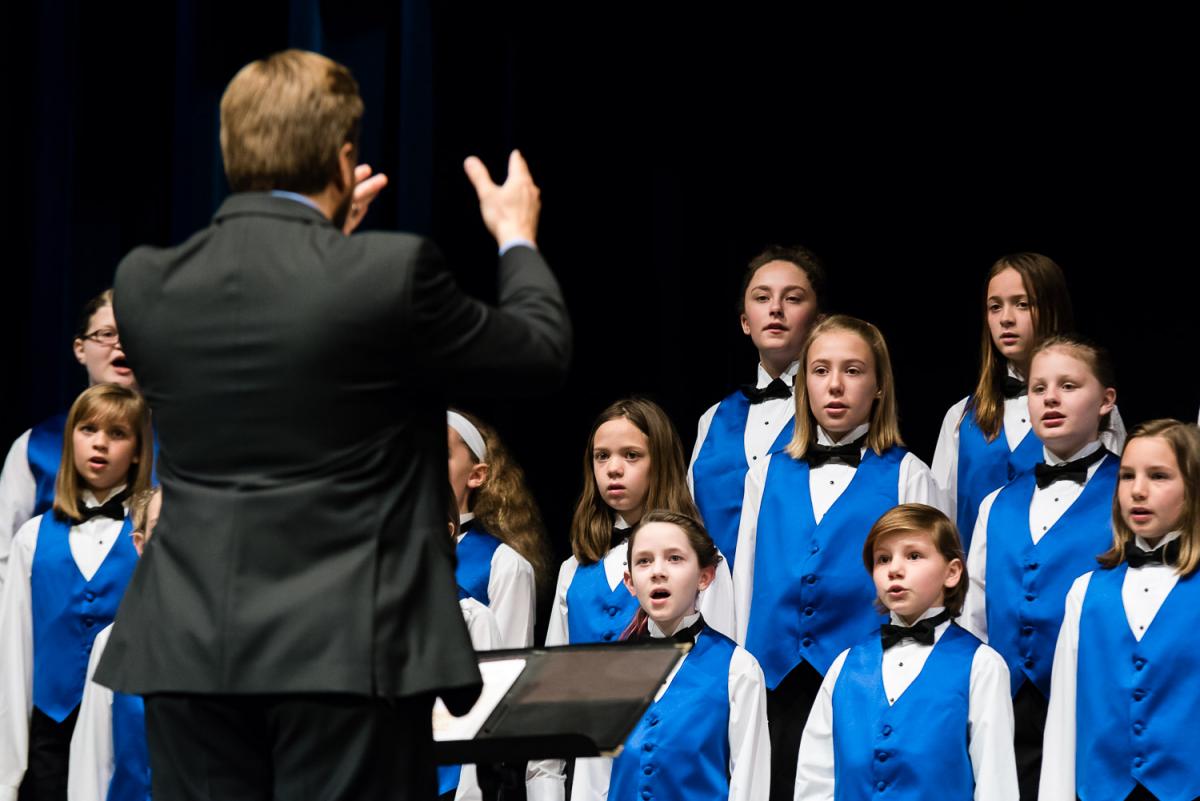 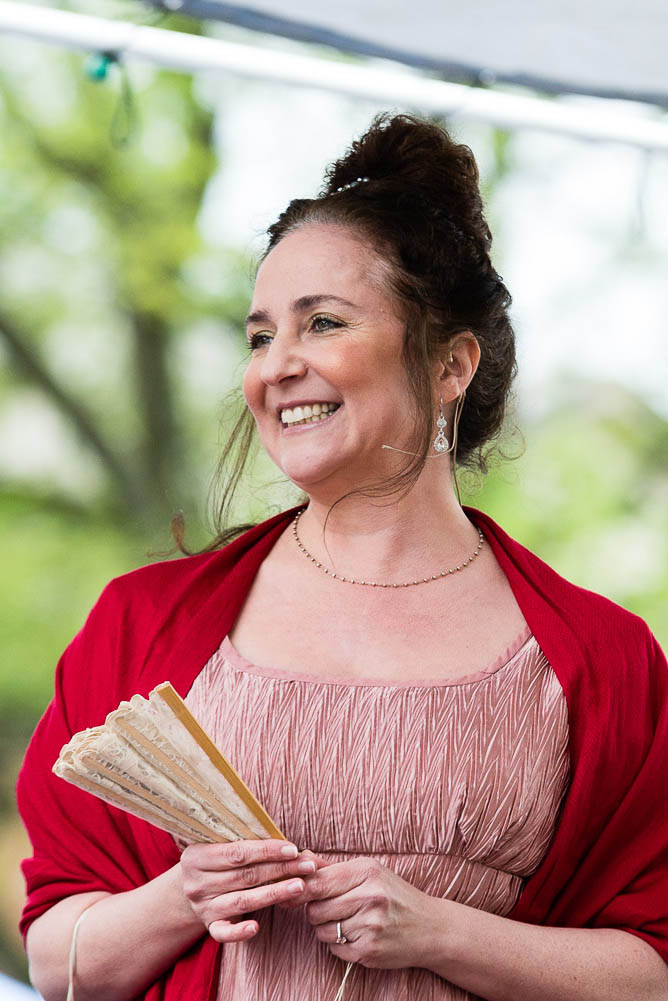 A block away, Carolina Alvarez, an adjunct instructor in the Theatre Department, takes the stage for her one-woman show as Margaret Blennerhassett, an aristocrat and poet who was born in the 1770s and died in 1842. As Blennerhassett, she discusses her worldly travels and her life as the wife of Harman Blennerhassett, as well as calls upon an audience member to join her onstage to give him a lesson on “fanology,” also called “fan language” — a set of gestures a lady can make with her fan to send private messages to someone in her presence. From a wide open fan — which signals “wait for me” — to a closed twirling fan — signaling “I wish to be rid of you” — Blennerhassett spent about five minutes giving her onstage guest and the audience a lesson on the secret language.

After her first of two solo shows — the second highlighting suffragist and abolitionist Frances Barker Gage — Alvarez is approached by the man and his guest to pose for a photo and to thank her for the show. Two of her students, Economics major XiRui Guo ’20 and Geology major Skout Barger ’20, were also in the audience to watch their instructor on stage.

“I thought it was really neat,” Barger says. “I’ve enjoyed seeing all the different types of arts that are here, and all of the artists are really welcoming and friendly.”

Alvarez loves to educate her audiences about historical figures by bringing their stories to life on stage.

“Events like this are very important,” Alvarez says. “The mission of the Brick Street Arts Bash is to bring the talents of the region together and also to help highlight the importance of the arts — not only for students K through 12, but also in higher education and in everyone’s daily life. It was also important to Donna, Marshall and the students to bring visual arts, theatre, dance, and music to the area for free to make sure the day was inclusive, not exclusive. Everyone should be able to experience the arts.”

After performing with the Marietta Children’s Choir, 11-year-old Amelia Schenkel was happy to have the opportunity to perform for the community in the newly renovated Peoples Bank Theatre.

“We worked really hard on the songs and it was really fun to do,” she says. “Most of us were pretty nervous. (The festival) is exciting because some people don’t get to see these kinds of things.”

For visitors entering the festival at the corner of Fourth and Putnam, the first images they come to include a giant yellow metal fish sculpture and other large pieces created by weld artist David Griesmyer, of Malta, Ohio. He is currently working on an art installation that would start in Zanesville and follow the Muskingum River to Marietta. The pieces would include nine of the giant fish and 25-foot-tall buck and doe sculptures. 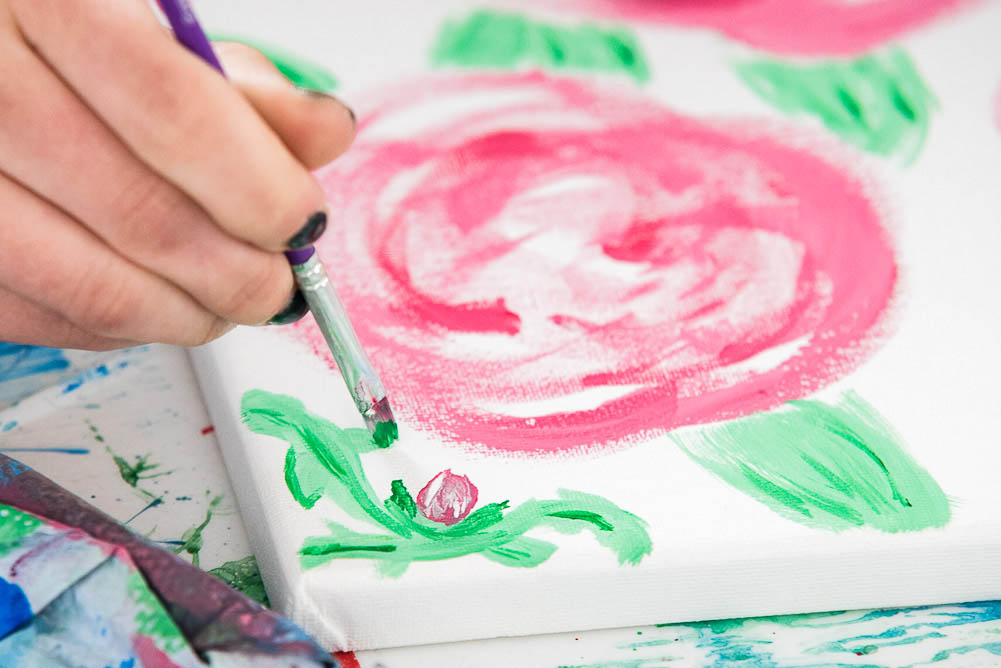 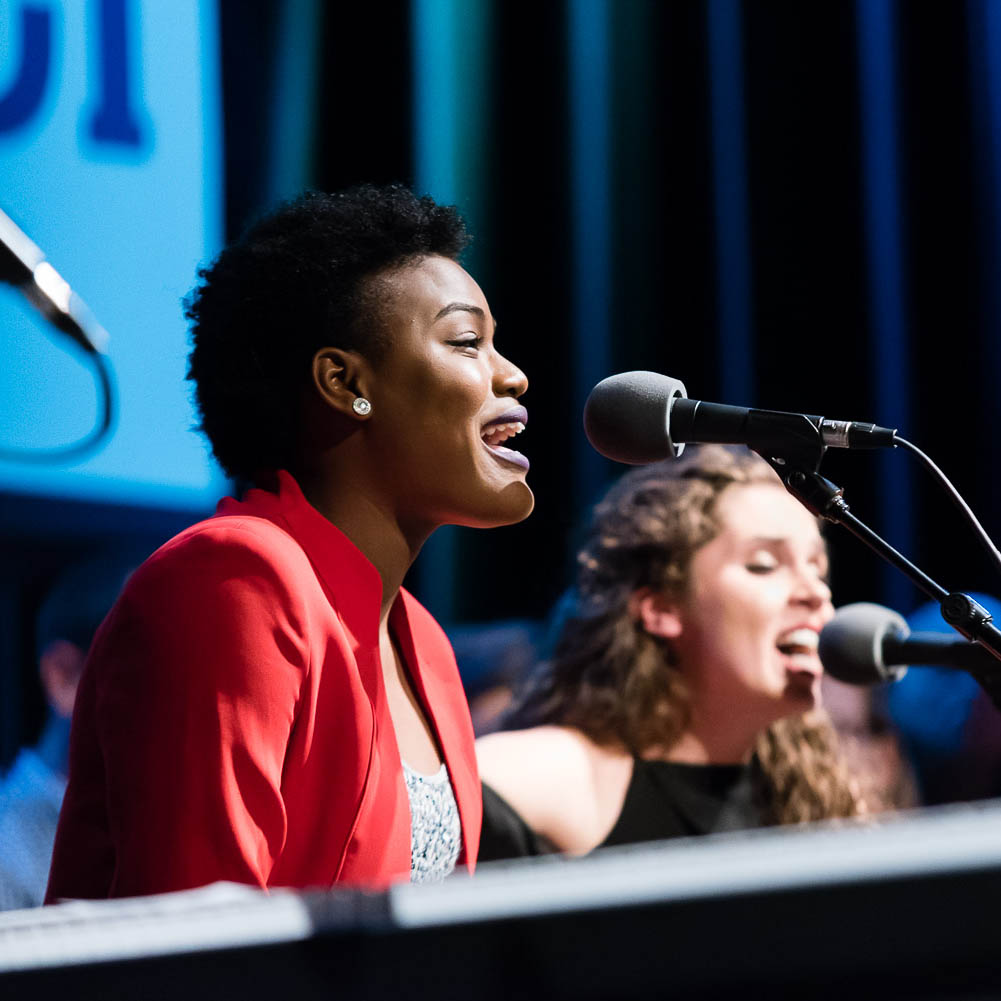 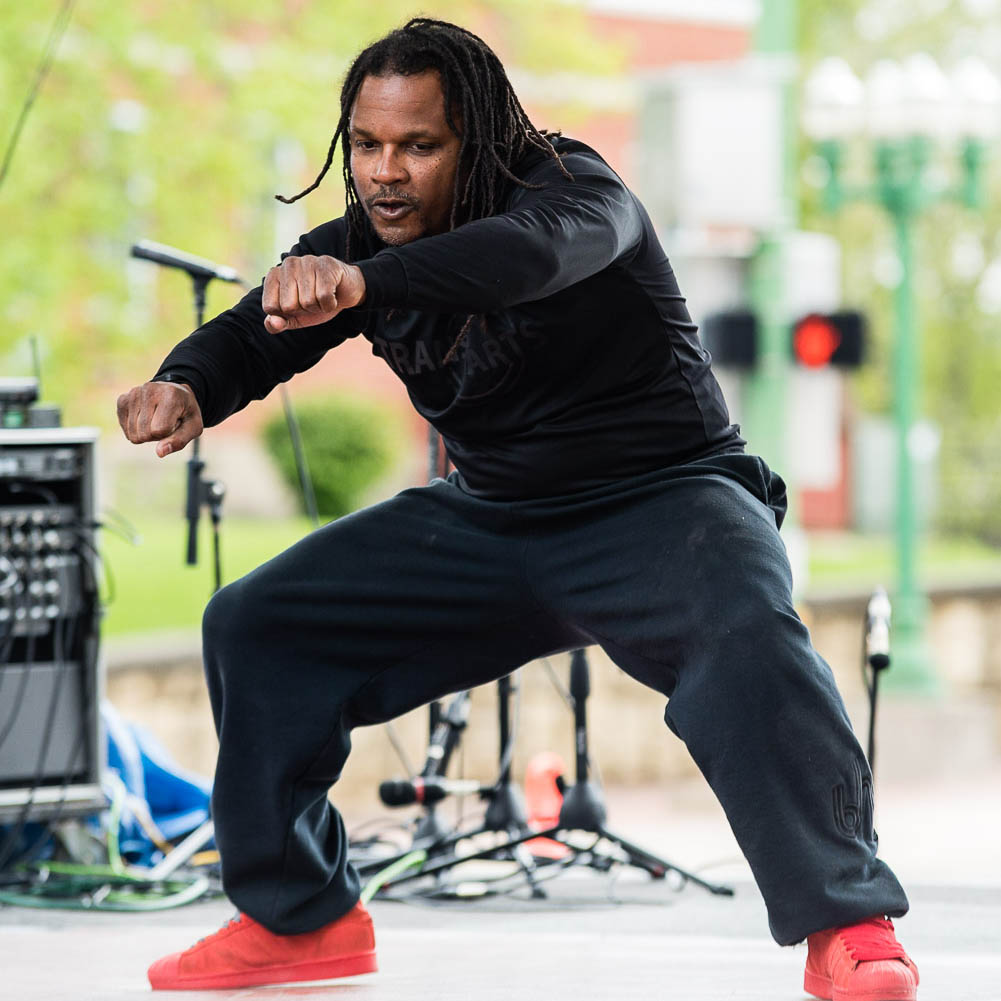 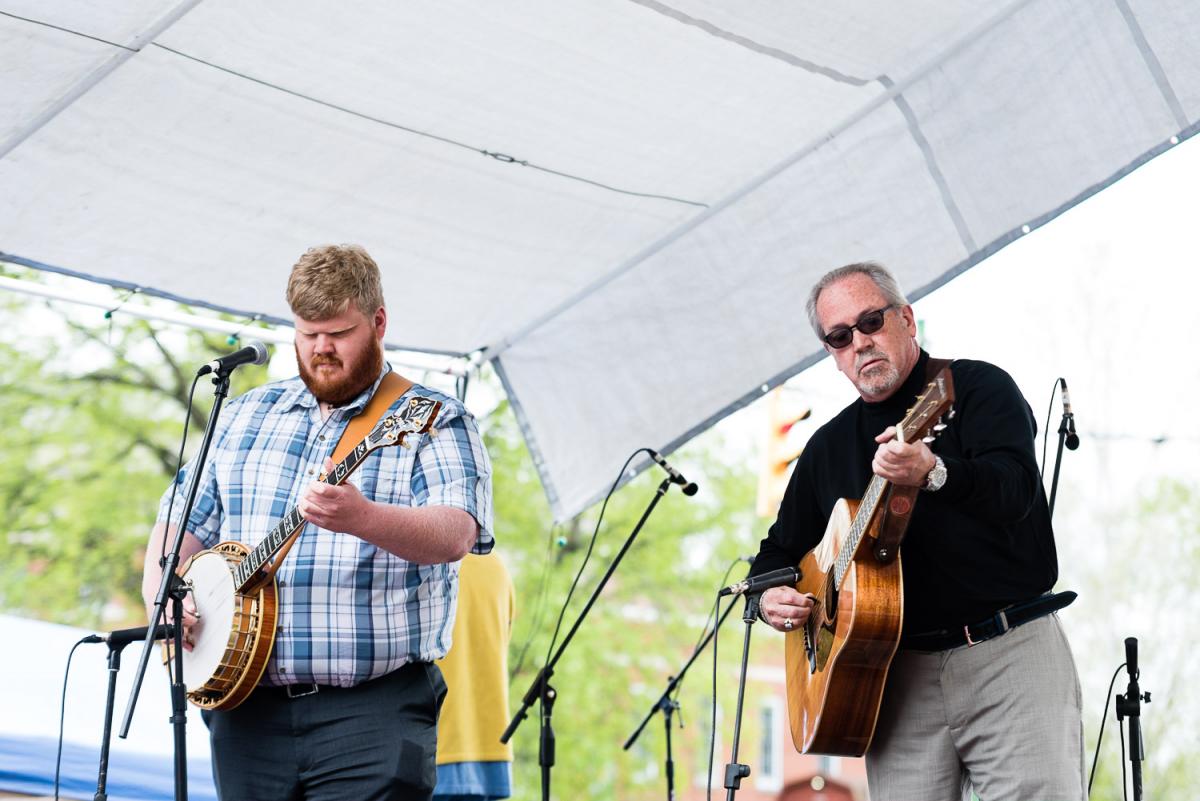 “When people first come up to one of my pieces, they assume it’s been cast. When I tell them it’s all been TIG (Tungsten Inert Gas) welded and that there is no frame — so I built them from the bottom up — that really gets their attention,” Griesmyer says. “They see it in a whole new way. I love what art can do.”

Music Education major Tabby Lewis ’17 was one of the chairs of the festival and spent the day checking on artists and supporting the many volunteers who staffed the events.

“My hope was to bring a positive experience to the community, and I think we’ve accomplished that,” she says. “These types of experiences really tie you to your community, so we wanted people of all ages and all backgrounds to be able to have this type of enrichment. Plus, it’s a good lead-in for arts advocacy.”

Steven Moore ’13, two-time National Banjo Champion, was happy that Kimball reached out to him about the festival. He performed for an hour on an outdoor stage at the corner of Front and Putnam streets.

“I’m happy to come back,” Moore says. “Marietta College has done a lot for me. It’s a great place to come, even if you aren’t planning to study music. You can still perform or be a part of the arts. A lot of my fraternity brothers were in the theatre while majoring in something else. Marietta College gives you many types of experiences.”

Grace Matombe ’20 and Sadie Johnson ’20 were part of a special PBS taping of Songs at the Center in the Peoples Bank Theatre. Four up-and-coming young musicians were invited to perform for the show, which will air at a later date. Matombe, who is an international student from Kinshasa, Democratic Republic of the Congo, performed gospel songs she wrote with Johnson playing her guitar and providing vocals, as well. Johnson, a seasoned blues guitarist and vocalist, also performed original works for the show’s taping.

“Coming here, I could never imagine myself singing so frequently as now. It started in my church, the First Nazarene Church, then in the women’s choir,” Matombe says. “The first time I got to sing with Sadie was in Marshall’s church. Since then, almost every month in Marietta, I find new opportunities as singing the National Anthem for the basketball games, opening for Delbert McClinton with Sadie, winning the President’s Award and even more. Really, I am so grateful for this community that is able to help and believe in someone’s gift even more than the person itself does. Coming to Marietta has certainly been the best choice I’ve ever made in my life. I love this community, I love my Congolese friends who always come and support me. I am very grateful, and I can’t wait for many other big things to come.” 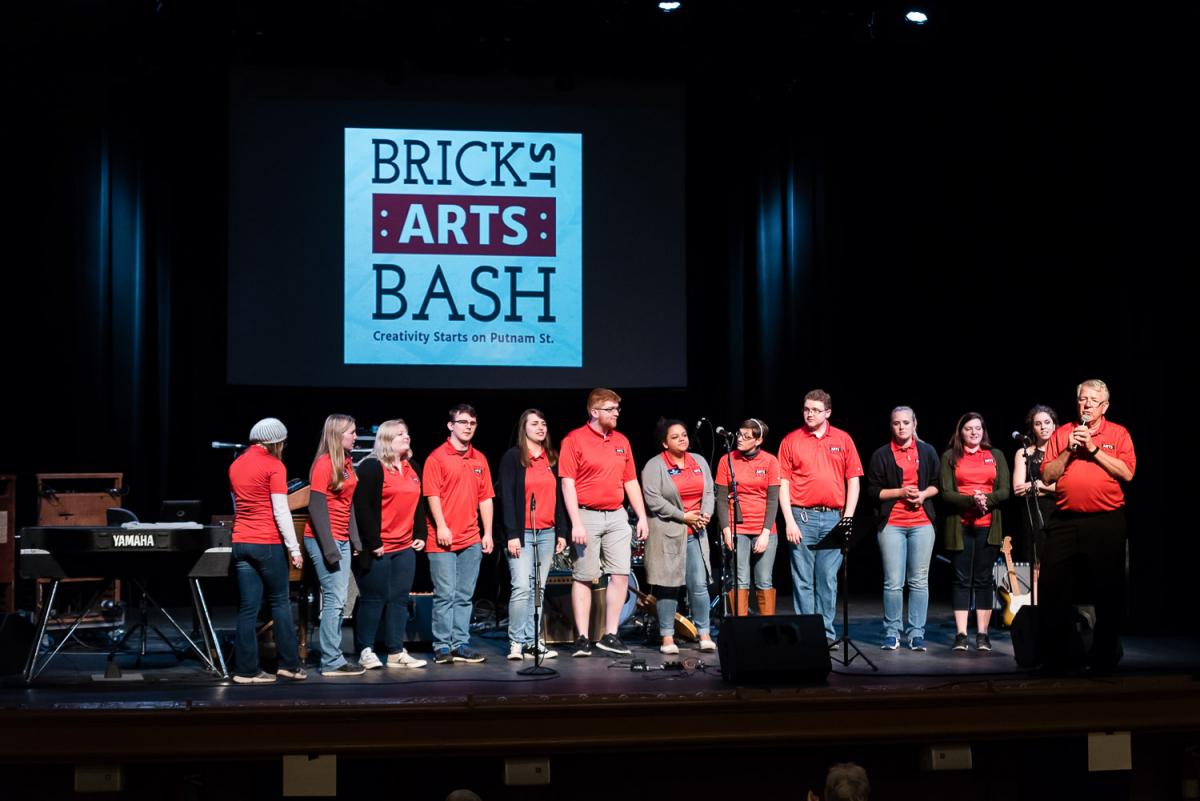 > Marshall Kimball (far right) recognized the Brick Street Arts Bash planning committee, made up of Marietta College students, for their months of work leading up to the event

By the end of the event, Kimball reflected on the entire process involved in making the Brick Street Arts Bash a reality for the Marietta area

“The main original objective of this large project was to teach all our music majors how to truly be an advocate for the arts and how to show everyone how important arts are in the lives of everyone,” he says. “Anyone attending could see the joy, peace, love and unity that were present. The laughter of children, the smiling faces on the faces of all adults, the life in the step of all ages were all present. You could see a great mixture of all the ages at the concerts, at the painting tables, at the dance demonstrations, at the concerts. When the Transit Arts Music and Dance Group — a bebop and hip-hop group — gave their performance in the Peoples Bank Theatre, the most enthusiastic parts of the audience were the older generation in attendance. The arts transcend all age divisions. The Brick Street Arts Bash was a smashing success in its principal goal and many others as well.”

As for the many Marietta College students involved in the planning and working the event, Collins had high praise.

“Our music education students can go into the workforce today saying that they truly developed and executed a full regional arts festival and that they have experience collaborating with artists, local government and the mayor’s office, vendors and volunteers,” Collins says. “Not many music education majors can say that.”

See More Photos From the Event 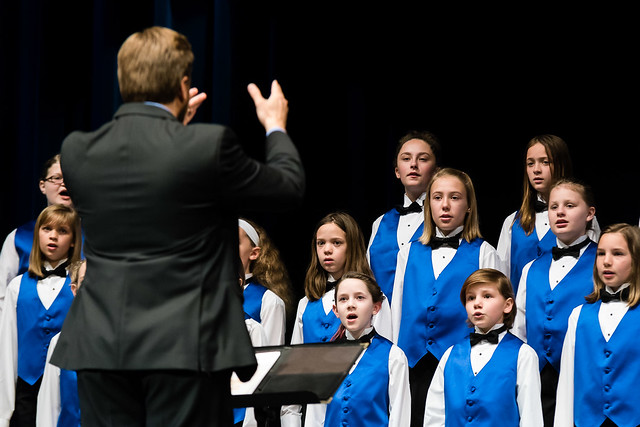