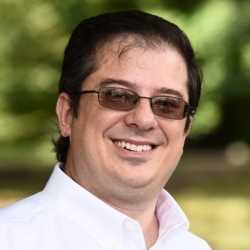 Don Esker originated in northeast Ohio and spent the endoparasitic, ectoparasitic, and kleptoparasitic phases of his ontogeny near Akron. Like all people from Akron, he has a cousin that went to school with LeBron. He decided to become a vertebrate paleontologist at age 5 and has not deviated from that course. He attended Marietta College because it has the best fossil-to-student ratio in Ohio and was pleasantly surprised to find that it has the best geology faculty as well.

He attended graduate school at the University of Cincinnati in 2004, took a job at The Mammoth Site of Hot Springs, South Dakota, in 2007, but briefly returned to Cincinnati in order to defend his thesis on Marietta College's Aaron Scott Site in 2009. In the spring of 2008, he was promoted to Bone Bed Curator of The Mammoth Site, a position he retained until winter of 2011, when he moved to central Texas. In the spring of 2012, he took over as the Director of the Mammoth Site of Waco, Texas, (now Waco Mammoth National Monument). He left the site in 2014 to go to Baylor University full time as a doctoral candidate studying the mammoths and other vertebrates of prehistoric Waco. He is scheduled to graduate in the winter of 2019.

Esker's research interests focus on vertebrate paleontology, though if pushed he'll admit that many arthropods and cephalopods are pretty cool. He has particular interests in Jurassic sauropods, sphenodontians, and turtles, Pleistocene megafauna, tortoises of all ages, and the ecosystems of the Early Permian of Ohio. He uses multivariate analysis, stable isotope analysis, and photogrammetry in much of his research.

When not doing research, he can be found walking his [Testudo marginata], Oliver.