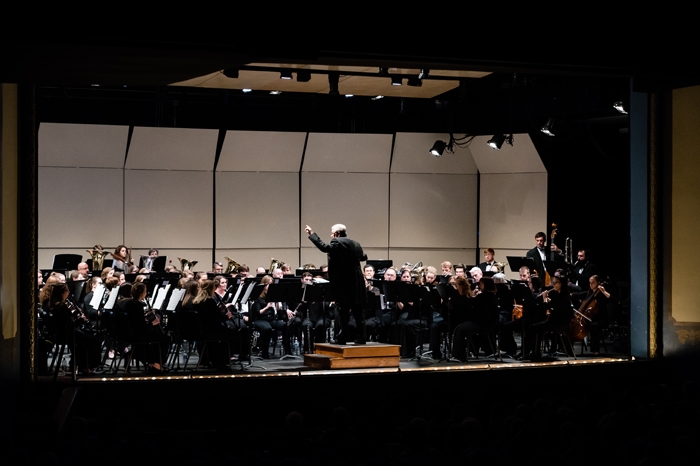 The Peoples Bank Theatre will come alive with the sound of music as the Marietta College Symphonic Band and Wind Ensemble will perform the annual Fall Band Concert at 7:30 p.m., Thursday, Nov. 30.

The concert is entitled “Suite Music,” and it is free and open to the public. Doors to the theatre open at 6:30 p.m. A free-will offering will be taken at the end of the concert. No tickets are needed for the concert, but seating is on a first-come, first-serve basis.

“Much thought has gone into the programming for the concert,” said Associate Professor Marshall C. Kimball, Director of Bands and Instrumental Activities at Marietta College. "The music being performed in this program includes the very first official band composition written for the American Concert Band, First Suite in Eb for Military Band by Gustav Holst. The debut of this composition became the impetus for other composers to write for what is now considered the American concert bands of today.”

Kimball added that there will also be a traditional march, On the Mall, Cajun Folk Song Suite No. 2, and others.

“The music represents music from the time period of the First Suite in Eb to music written and published in 2016. The variety will touch the heart and soul of all individuals in attendance,” he said.

One of the many highlights of the concert will be the performance of the Hillandale Waltzes for Solo Clarinet and Wind Ensemble with Christopher Bowmaster, Instructor of Clarinet, as clarinet soloist.

“We are blessed to have Chris as a part of our full-time faculty in the Music Department,” Kimball said. “He wears many hats and does them all well. He is a fabulous clarinetist and fabulous addition to our program. People will enjoy his artistry and musicianship.”

It is the goal of the College to “Pack the House” with a full audience of 940 attendees.

“We are so blessed to be able to present some wonderful literature, make a connection of the value of music in our lives and do it all in the beautiful Peoples Bank Theatre,” Kimball said. “We hope the community and college will support the bands for this special event.”