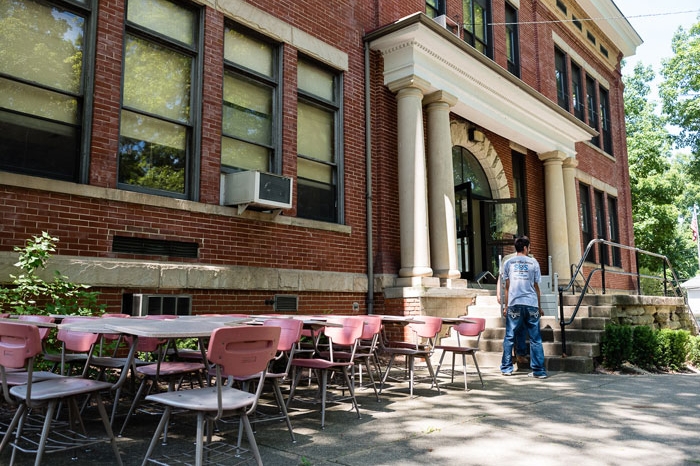 A small team of local high school students spent Wednesday afternoon in school, though they weren’t actually hitting the books.

Instead of showing off their brainpower, the students — most of whom attended Marietta High School and Parkersburg Catholic High School — used their arm and leg strength to haul traditional single-seat classroom desks and longer group desks donated by Marietta College into classrooms at St. Mary Catholic School in Marietta.

Marietta College donated 85 pieces of classroom furniture to local non-profit organizations after updating 10 classroom and lecture spaces in Thomas Hall and Rickey Science Center. Dr. Mark Miller, Associate Provost at Marietta College, said one of the spaces — a lecture hall in Rickey — underwent a complete renovation thanks in part to the endowment established by David Rickey ’78 and the J&D Foundation in 2000.

Rather than discard the used desks, the College opted to reach out to schools and other nonprofits to ask if they could use them.

“We’ve contacted about a dozen schools/non-profits in the Marietta and Parkersburg area, and myself and (Physical Plant Director) Fred Smith have heard from a handful of the schools that they are interested in the desks,” said Emily Embrescia MAP’18, who is a student-worker in President William N. Ruud’s office this summer. “I am waiting on a couple calls back from some of the organizations to hear if they are for sure interested.”

Starting Friday, Aug. 11th, the College will offer 80 additional unclaimed desks to community members and organizations. Those desks will be available to take from the lot at the corner of Church and Fourth streets, across from the Beren Tennis Center.

Cathy Rauch, a teacher at St. Mary, helped to organize the desk move at the school and was grateful for the College’s donation. St. Mary serves about 175 students ranging from pre-school through eighth grade.

“We’re putting some of the table desks into a classroom,” Rauch said. “The single-seat desks are going in our math/French room. These (donated desks) are helpful because a lot of the desks we have in the building are breaking or broken, and there’s no way we could afford to buy desks and tables like these.”