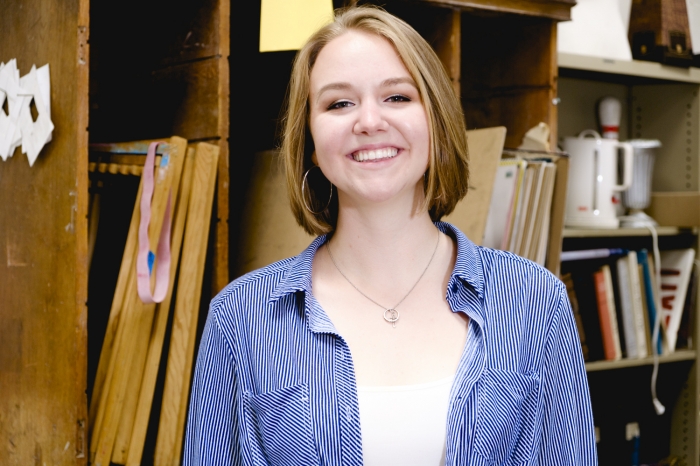 While inconvenient, the delay never impacted her desire to showcase her business idea — ArtaBella, which is based on selling hand-painted clothing, commissioned artwork and her personal artwork. Her concept also won the second round of the competition back in February.

“While putting my business concept into practice over the summer, I quickly came to the conclusion that being an artist was the career that I wanted to pursue for the next few years, regardless of if I won this prize or not,” she said. “However, as I was preparing for round three and was able to fully create ArtaBella, and I knew that if I could win the funding, I would have the chance to take my company to places I dreamed of it being right out of graduation.”

Seaman, who is majoring in both Communication Studies and Studio Art, was awarded $7,000 as the top finisher in the competition, and she can use that to develop and grow her fledgling business.

Four students, including Seaman, presented their business plans in a webinar format for the judges on Sept. 17th. The final round of the PioBiz Competition was originally scheduled for April 16, but due to COVID-19, it had to be postponed. The judges can allocate up to $10,000 among the top three business plans. They also awarded $1,500 to Chloe Burianek ’23 (Georgetown, Pennsylvania) for her business idea, Rolling Scotty Photo Services. Burianek is majoring in Strategic Communication and Graphic Design.

Seaman is pleased her hard work and some of the early successes she has enjoyed in starting her business were recognized by the judges.

“Now, thanks to this award and the support of my mentors and loved ones, I have the financial cushion that I need to begin jumping right into making art and providing work for all kinds of patrons,” she said. “I can put what I make in sales back into ArtaBella and into my salary instead of having to put most of it toward covering the startup costs that this prize will help with. Winning Pio Biz was the confidence boost and the financial boost that I needed to jump right into my career as an artist upon graduation, and I am so thankful for the opportunity to do so.”

Dr. Jacqueline Khorassani, Director of Entrepreneurship, said she hopes they can start this year’s PioBiz Competition sometime in the 2021 Spring semester.