‘She Kills Monsters’ opens at Marietta College on Oct. 31 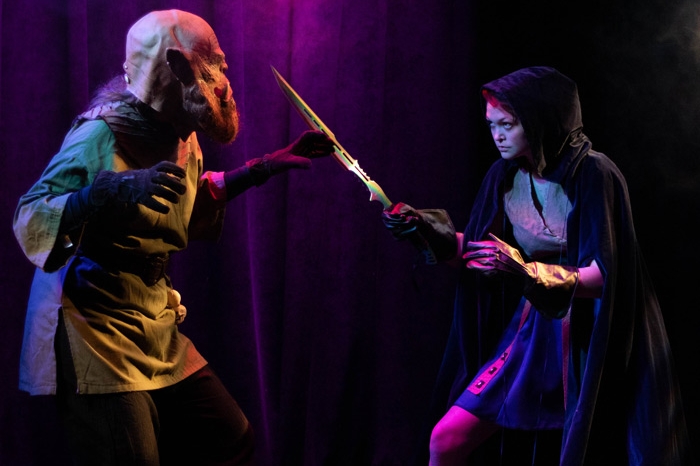 Magic and monsters are coming to the Mid-Ohio Valley with the Theatre at Marietta College’s upcoming production of “She Kills Monsters” by acclaimed young playwright Qui Nguyen.

Opening on Halloween (October 31st) and running through November 9th, this comedic romp into the world of fantasy role-playing games tells the story of Agnes Evans — played by Madison Roe ’20 (Waterford, Ohio) — as she leaves her Ohio childhood home after the death of her teenage sister, Tilly (played by Joan Owen). When Agnes finds Tilly’s Dungeons & Dragons notebook, she stumbles into a journey of discovery and action-packed adventure in the imaginary world that was Tilly’s refuge.

“I’m very excited about the combat work we have done! It’s intense and a lot of fun to do, but it’s hard work,” Roe said. “I’ve learned how much I love doing physical work on the characters that I play. It’s so much fun to play with and change as the play goes along.”

As the actors work to perfect their scenes, other Marietta College students are busy designing the various unique technical aspects of the production. Emilee Hairl ’23 (Parkersburg, West Virginia) is creating makeup and hair looks to transform the actors into homicidal fairies, nasty ogres, and more while McKenzie Peterson ’22 (Renton, Washington) is designing and building puppets and heart-pounding special effects.

“I love getting to help bridge the gap between the director’s vision of each character and the actors who will play them. By adding masks, hair, wigs, and makeup it can completely transform these talented actors into their characters,” Hairl said. “Seeing them with their full look on does a great deal for their confidence onstage and being able to give that to them makes my work important.”

Peterson also is excited to see how all the parts will come together.

“With special effects, we have a lot of areas that can be focused on ranging from things like fog to more physical like ripping someone’s arms off, so it is less of one specific thing and more of working on the entire show all at once. I can’t wait to see how all the elements come together to form the final product of the show at the end.”

“We had a record-breaking number of MC students audition for the production and rehearsals have been an absolute blast because it’s clear the students care deeply for the source material,” he said. “In the past few years, Dungeons and Dragons has rocketed into the cultural conversation in our country. A large group of famous artists have recently ‘come out of the basement’ and admitted their love for the game — from stars one might expect like Wil Wheaton and Simpsons creator Matt Groening to pretty surprising players like Academy Award-winning actress Dame Judi Dench, two-time NBA MVP Tim Duncan, shock-rock superstar Marilyn Manson, and action film actors Vin Diesel, Karl Urban and Joe Manganiello.”

“She Kills Monsters” opens at Marietta College’s Friederich Theater at 8:00 p.m., Thursday, October 31st with a special Halloween opening night celebration including a Cosplay/Costume Contest for audience members with prizes.

A Playing for Others matinee will be presented at 2:00 p.m., Saturday, November 9th. The ticket proceeds and donations received from that performance will benefit Parkersburg Pride, a 501c3 nonprofit that sponsors events and programs to provide social and educational resources to members of the LGBTQ+ community and their allies, friends, and family members.

Tickets are $20 for adults and $15 for seniors and children, although parental discretion is advised as the play is equivalent to an R movie rating. Tickets for all six of the performances are available now through www.marietta.edu/boxoffice.

Don’t miss this high-octane homage to the geek and warrior within us all.

“She Kills Monsters” is presented by special arrangement with Samuel French, Inc., a Concord Theatricals Company.