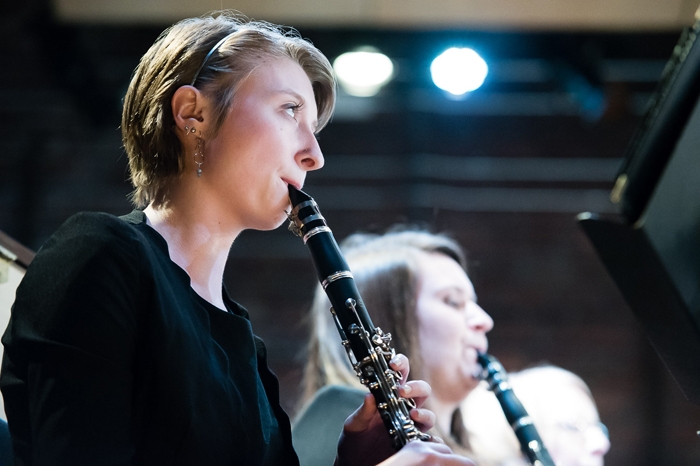 Marietta College’s Spring Band Concert — “Out of This World” — will be performed starting at 7:30 p.m., Tuesday, April 24th, at the Peoples Bank Theatre, 222 Putnam St. in downtown Marietta.

Marshall C. Kimball, Director of Bands at the Edward E. MacTaggart Department of Music, said all of the programmed music will deal with things “we can’t see and only imagine in our mind's eye.”

The concert is free and open to the public. A free will donation will be taken during the concert.

“This concert will feature music that will meet all of the musical tastes of those in attendance,” Kimball said. “Whether a beautiful flowing memorable melody or something more on the contemporary music genre, it’s all included. Audience members will have the opportunity to hear some music they have heard at some time during their life but will also be exposed to some music they have not heard.”

The Symphonic Band and Wind Ensemble will be performing on the concert under the direction of Kimball with guest conductor Christopher Bowmaster. The Symphonic Band, an ensemble of approximately 75 instrumentalists, will be performing: In Flight by Sam Hazo, On Wings of Angels by Barry Milner, Finale from The New World Symphony by Anton Dvorak, Beyond the Horizon by Rossano Galante, and will close their portion of the concert with of performance of Star Wars (Main Theme) by John Williams. The final selection will include a multi-media light show developed by Associate Professor of Theatre David Makuch and Brad Smith of the Peoples Bank Theatre.

The Wind Ensemble, a group of 40 instrumentalists, is a smaller ensemble completely selected through an audition process. The Wind Ensemble program will include March to Mars by Julius Stefano, Mars from The Planets by Gustav Holst and Where Never Lark or Eagle Flew by James Curnow. The concert will conclude with a performance of David Gillingham’s Galactic Empires, a dramatic tone poem telling of a musical journey through only three of an infinite number of galaxies, two foreign and one of which is our own — Battlestar of the Andromeda Nebula, Eveningstar of the Magellanic Cloud and Earthstar of the Milky Way.

March to Mars is dedicated to the memory of Dr. Margaret Ross, former Counseling Center Director and Professor of Counseling Services at Marietta College and a strong supporter of the College’s instrumental music program and music overall. The performance of Mars will include a slide show of authentic pictures of Mars, which was prepared by Dr. Ann Bragg’s Life in the Universe class at Marietta College.

“Our goal is always to offer Marietta and the surrounding Mid-Ohio Valley with the best in musical entertainment, great music education for our students and to Pack the House at the beautiful Peoples Bank Theatre,” Kimball said. “We hope the community will come and support these students in their last concert of the academic year.”