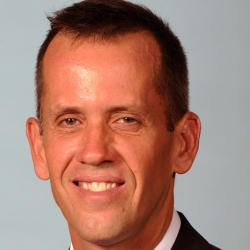 Greg Myhr joined the Marietta College athletic department as the men's rowing coach in July 2019. Myhr comes to Marietta College after serving as the head coach for the Cambridge Boat Club in Cambridge, Massachusetts, the past two years. He was responsible for implementing a fully integrated program for both the Masters and Junior rowers at CBC. Myhr led the CBC Junior Women to three gold medals at the 2018 Canadian Henley Regatta.

Myhr began his coaching career as the assistant men’s coach at his alma mater, the University of Wisconsin-Madison, from 1995-97. He then served as the Badgers’ head freshman coach from 1997-2003 before moving to Georgetown University as the freshman heavyweight coach from 2003-05.

Wisconsin won five Ten Eyck Team National Championships and three Intercollegiate Rowing Association (IRA) Freshman Four titles during Myhr’s tenure. The Badgers also claimed the program’s only Eastern Association of Rowing Colleges (EARC) Freshman Eight Championship in 2000. Following his success at Wisconsin and Georgetown, Myhr was named the head men’s rowing coach at George Washington in 2005. He spent four years developing the Colonials into a nationally competitive Division I program where his Varsity Eight crew ranked as high as No. 12 nationally in 2009.

Myhr accepted the head men’s heavyweight coaching position at the University of Pennsylvania in 2009 and remained with the Quakers for six years. His tenure at Penn included success at the conference and national levels, while the Quakers turned in one of their best years in recent school history in 2015. Penn finished 10th overall in the Ten Eyck team points standings at the 2015 IRA Regatta, highlighted by an 11th-place finish in the Varsity Eight to match the school's previous best that was achieved in 2012. The Quakers also earned the Clayton Chapman Team Trophy at the IRAs, recognizing the nation's most improved team.

Myhr rowed collegiately at Wisconsin serving as a team captain and winning the Norm Sonju Award for outstanding contribution to the success of the UW crew program. Myhr was a part of the Freshman Eight crew that won a bronze medal at the 1989 Eastern Sprints. He added a pair of IRA silver medals to his résumé in the 1990 Straight Four and 1991 Varsity Eight. The Varsity Eight crew was a grand finalist at the 1992 IRA.

An avid sportsman, Myhr has competed in the Head of the Charles 27 times since 1987. He has completed 19 American Birkebeiner ski marathons since 1996 and completed the 2002 Wisconsin Ironman Triathlon. A native of Bethesda, Maryland, Myhr was a standout oarsman at Walt Whitman High School where he helped launch and served as the team captain for the first high school rowing team in the state. Myhr capped his scholastic career with an invitation to the U.S. Junior National Selection Camp in 1988.

Myhr and his wife, Kitty, have one son, August.