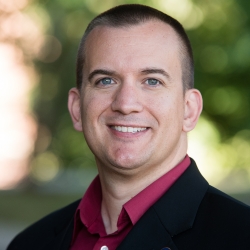 Dr. Jay Dougherty is the Director of Choral Activities at Marietta College in the Mid-Ohio Valley where he teaches all campus choral ensembles, a contemporary a cappella ensemble, the community Oratorio Chorus, choral methods, beginning conducting, and advanced choral conducting. Prior to his appointment at Marietta College, Jay taught on the choral faculty at Metropolitan State University of Denver where he directed a 50-voice Men's Choir, the Women's Chamber Choir, and the community's Auraria Chorale (founder).

He has served as the director of various community and youth ensembles, many of which have competed and earned the highest possible honors and awards. While in Denver, he directed the Longs Peak Chorus, a community men’s chorus. Under his direction, they competed in a 9-state Rocky Mountain Competition, taking home the title of "Plateau II Champions" and "Most Improved Chorus." Jay also served as the assistant director of the world-renowned and internationally competitive Sound of the Rockies Chorus, and as the director of the 52eighty Youth Chorus, which took first place honors under his direction in the international youth chorus competition, 2014.

Jay also serves the Barbershop Harmony Society in a variety of capacities. He served for a number of years on the Society’s Music and Performance Committee, and is an inaugural member of their OCAC program (Outreach Certified Adjudicators and Clinicians), with whom he advocates for barbershop to various choral organizations through their professional conferences. Jay is a certified music judge and acts as a regular coach and clinician for many quartets and choruses around the country and abroad.

Jay’s area of research is the implementation and application of just intonation in a choral setting. His recent research, a measurement of the potential change in tuning preferences after a week of instruction, suggests that after being taught about the differences between just intonation and equal temperament, listeners will favor just intonation. Other areas of interest include overtone reinforcement, musicianship, interpretation, and healthy vocal production.

Jay is in demand as a clinician, judge, coach, presenter, conductor, and adjudicator for festivals, honor choirs, conventions, and competitions around the country. He lives in Vincent, Ohio, with his wife and five daughters.