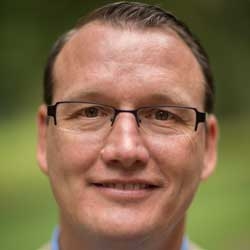 Dr. Danford was born and raised in southeastern Ohio and studied abroad in Toledo, Spain. He later directed study abroad programs for Ohio State in Cuernavaca, Mexico, and Toledo, Spain, and spent two years teaching English in Madrid. Before joining the faculty at Marietta College, he taught Spanish at Montclair State University in New Jersey and Ohio University. During his time as a faculty member at Marietta College, he led short-term study abroad programs to Spain and Brazil, and also served as director and academic advisor of study abroad. He became a tenured associate professor of Spanish and Portuguese in the Department of Modern Languages in 2007, was appointed Vice President for Diversity and Inclusion in 2011, and was named Vice President for Student Life and Diversity in 2015.

His publications address histories of cultures in contact. These include co-edited translations, along with critical annotations, of a 17th century history of Jesuit missions in northern New Spain (now Mexico and the southwestern United States), as well as a 16th century catalog of cultural differences between Europeans and the Japanese written by a Jesuit missionary from Portugal who was one of the first Europeans to live for an extended period of time in Japan. He also co-edited a translation of a recent book-length study of the positions taken on slavery by Protestant missionaries from the southern United States who migrated to Brazil following the Civil War.