2020 Harrison Scholars ready to live up to expectations 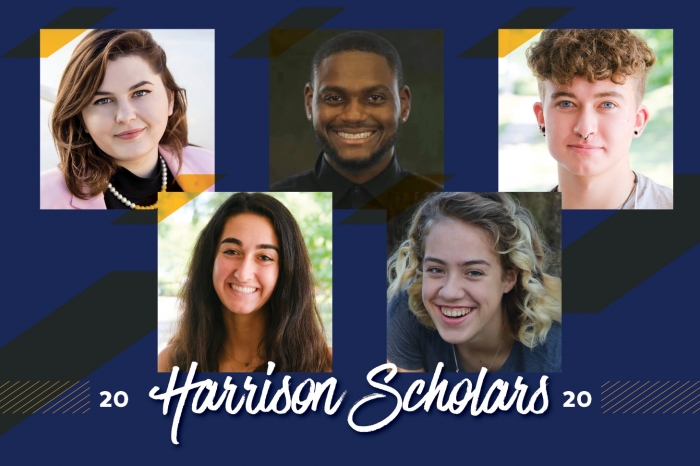 Nick Gennuso ’24 (Washington, D.C.) describes receiving a full scholarship to Marietta College as “an amazing opportunity,” but it’s an opportunity for which he feels both grateful and guilty at the same time.

“I do feel some guilt that this money could have gone toward another student,” he said. “I don’t think that guilt will go away, but I’m still incredibly grateful for this scholarship. It will be exceedingly helpful, especially if I decide to seek a master’s degree, because I will still have money that I would have spent on undergraduate school.”

Gennuso is one of five incoming freshmen to receive the full tuition Charles Sumner Harrison Scholarship. The award is named after Charles Sumner Harrison (Class of 1876), who is the first African-American graduate of the College. He is the first of three brothers from Harmar — the neighborhood located on the west side of Marietta — to complete his higher education at Marietta College. The other recipients are Tev Gilbreath ’24 (Springfield, Ohio), Aria Hawks ’24 (Columbus, Ohio), Andi Majchrzak ’24 (Tampa, Florida) and Auva Zandi ’24 (Dublin, Ohio).

“We had an amazing group of prospective students who we interviewed for the scholarship. The students were all very involved in promoting social justice and inclusion in their community,” said Scot Schaeffer, Vice President for Enrollment Management. “We had a difficult time awarding only five scholarships because the group was so amazing. These are exactly the type of students we want at Marietta. Students who are going to think outside of the box, push to make changes in their community that will have a greater effect on society as a whole. These students are truly Pioneers and will make great changes while they are in school here and more so when they leave. This is the Pioneer spirit we want to tap into and promote.”

Gennuso is a Psychology major who plans to get a doctorate in either social work or psychology. He hopes to one day be able to have a positive impact on others, much the way the scholarship is a positive force in his life.

“I hope that maybe someday, I can do something to change the (current) system, or to support college students on an individual level, to, in a way, return the favor that Marietta has gifted me with this scholarship,” he said.

In addition to having a strong academic foundation, the scholarships are awarded to students who bring with them diverse experiences and a strong sense of community service and social justice.

For Gennuso, that experience involved growing up in very different environments. As a child he lived in a small town in Pennsylvania, then at age 11 moved to Washington, D.C., where he first experienced what it was like to be the minority. Later, the family moved to China where he attended high school for two years. There, he was once again the minority.

“It’s difficult to quantify exactly how my diverse experiences in my 18 years of life have impacted and changed me, but I know that these experiences helped to shape my identity and allow me to be more empathetic to others,” he said.

Majchrzak also brings a diverse experience to the College and hopes to show others that individual differences should be celebrated.

“All people on this Earth are unique. Whether that be because of your hair color, your eye color, the education you received, religion, race, ethnicity, gender, sexuality, or because no two people’s experiences are identical. This uniqueness is beautiful,” she said. “It’s what keeps life interesting. I can only imagine if everybody I met was exactly the same. To me, this uniqueness is the naturally occurring diversity of the world.

“Unfortunately, so many seem incapable of recognizing how amazing it is that no two are alike, and when people choose to target someone for being different, they tend to go after the unchangeable deeply personal characteristics.”

Majchrzak plans to become a veterinarian.

“Receiving a full-tuition scholarship has allowed me to attend Marietta College, which I really appreciate because I believe I’m much happier here than I would have been elsewhere. … It also means a lot to me because I’ve been discriminated against and consequently lost out on opportunities in my life for being pansexual and aromantic, so it’s refreshing to be rewarded for all of the hard work I’ve done to try to prevent future generations from having similar experiences,” she said.

Zandi also knows something about being different. The 6-foot-2-inch Biology student learned that while being tall made her different from many of her classmates, it also helped shape her into who she is.

“Everyone is unique in their own ways and diversity allows society to grow and learn from others. It is what makes us different from each other and the most important thing is learning to accept everyone for who they are,” she said.

“I always felt different from my peers,” she said. “I started to gain confidence through volunteering in my community and taking advantage of my opportunities that allowed me to become the president of two different clubs at my school. Being different made me who I am today and I wouldn’t want it any other way.”

Hawks believes diversity is important because it allows one’s viewpoints to be challenged and prevents the formation of a monoculture.

“I believe that having a diverse perspective, especially in a classroom setting, helps students expand their worldview and subsequently learn more,” Hawks said.

Hawks is majoring in Political Science with plans to attend law school. She said the importance of being a Harrison Scholar is almost too big to put into words.

“I would not have been able to get a college education without some form of financial aid and to have the full tuition covered allows me to focus on getting my degree without being paralyzed by fiscal responsibility,” Hawks said.

Gilbreath said he drew on his personal experience as a high school football player in his application for the scholarship.

While playing football in and of itself may not seem unique, the circumstances surrounding the team taught the defensive end a life lesson in diversity. That’s because he was part of a team that was actually the consolidation of two rival high schools. It taught him that two opposing sides can come together as one and work toward a successful, positive outcome.

“My city faced a lot — different crimes and murders — but the 2019-2020 football team brought us together. We made it to Week 14 in the playoffs. For some that may not seem like a big accomplishment, especially in the bigger aspect of the whole city, but it brought everyone together … We helped different viewpoints from the different schools come together. It created unity and we were finally one.