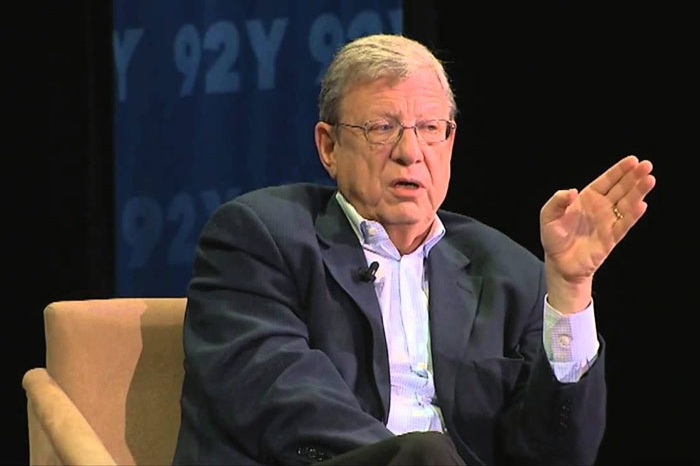 Jeff Greenfield, a veteran political, media and culture reporter and analyst, will be on Marietta College’s campus from October 10th-12th speaking with multiple classes and making a special presentation to the Class of 1968 during Homecoming festivities.

The focus of Greenfield’s visit is to discuss the tumultuous activities of 1968, a year that has been referred to as “The Year that Changed America Forever.” The Class of 1968 will be on campus celebrating their 50th anniversary as a part of the 2018 Homecoming.

Greenfield, who spent more than 30 years on network and cable television, while also working as a print journalist and best-selling author, will also interact with hundreds of students during his three-day visit — including being a part of a Pizza and Politics session that will focus on “Politics in Crisis: 1968 and 2018,” from 5:00-6:30 p.m., Wednesday, October 10th.

The community is also invited to a free presentation about 1968 from 2:00-4:00 p.m., in the Alma McDonough Auditorium Friday, October 12th. Greenfield will also be speaking with the Class of 1968 at this time.

Among other roles for CBS, CNN, ABC and PBS, he served as its lead analyst for primaries, conventions, presidential debates and election nights, as well as presidential funerals and Supreme Court confirmation hearings. Greenfield also has reported on the media, culture and trends. He is currently a columnist for The Daily Beast and POLITICO and a contributing correspondent for PBS’ “News Hour Weekend.

Though the five-time Emmy winner’s reporting has taken him to locales around the world from South Africa to Japan to Europe, he is principally known for his coverage of domestic politics and media. He has served as a floor reporter or anchor booth analyst for every national convention since 1988. He has twice been named to TV Guide’s All-Star team as the best political commentator and was cited by the Washington Journalism Review as “the best in the business” for his media analysis.

Before spending nearly a decade at CNN (1998-2007), Greenfield was a political and media analyst for ABC News (1983-97), appearing primarily on Nightline and delivering weekly commentaries for World News Sunday.

Greenfield, a native of New York City, graduated with honors from the University of Wisconsin, where he was Editor-in-Chief of The Daily Cardinal. He is an honors graduate of Yale Law School, where he was a Note and Comment Editor of the Yale Law Journal.

Following law school, Greenfield worked as a speechwriter in the Senate ODIC and 1968 Presidential campaign of Robert Kennedy. He then worked as Chief Speechwriter for New York City Mayor John Lindsay. Greenfield spent seven years with famed political consultant David Garth, and wrote books and magazine articles as well — his work has appeared in magazines ranging from The New York Times Magazine, Harper’s, and Esquire to The National Lampoon.

For 15 years, he was a syndicated columnist whose Universal Press Syndicate Columns appeared in more than 150 newspapers. He has also served as a columnist for TIME Magazine, Yahoo! News, and — currently — for The Daily Beast.

Greenfield has authored or co-authored 13 books, including national bestselling novel The People’s Choice, The Real Campaign and Oh, Waiter! One Order of Crow!, an insider account of the contested 2000 presidential election. His book, Then Everything Changed: Stunning Alternate Histories of American Politics — JFK, RFK, Carter, Ford, Reagan, was released to great acclaim in March 2011. A follow-up e-book, 43*: When Gore Beat Bush — A Political Fable, in September 2012, and his latest, If Kennedy Lived: The First and Second Terms of President John F. Kennedy: An Alternate History, was published in 2013.

Greenfield lives with his wife, Dena Sklar, in Santa Barbara, California, and New York City. He has two grown children and five grandchildren.