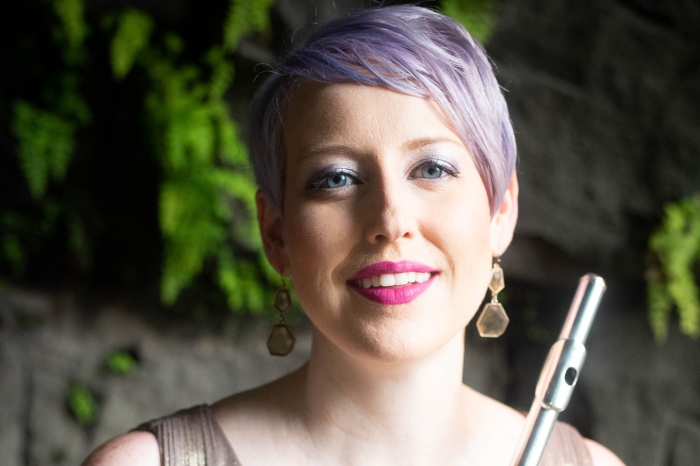 Flute virtuoso Lindsey Goodman, an instructor of flute at Marietta College and PARMA recording artist, is having an album release recital for her third solo album, Etereo, at 7:30 p.m., Saturday, January 18th, in the Alma McDonough Auditorium.

The event is free and open to the public. Among the songs being performed are Bluez by Josh Oxford and Penelope’s Song by Judith Shatin. The album is actually being released on Friday, January 10th by the distributor, Naxos of America.

Etereo, which is from Navona Records, is a multi-composer album featuring the internationally acclaimed flutist in solo, duo, and trio settings. Goodman’s virtuosic performances unleash the breadth of dynamic and tonal possibilities the flute offers, making for a riveting listener experience.

In Etereo, Goodman captures the dramatic thrill of her stage performances. With flare backed by impressive technical ability, Goodman releases the fiery potential energy stored up within her instrument. Listeners who wish to challenge their assumptions and expand their appreciation for flute music need look no further than Etereo.

“I am excited about releasing my third album, and I’m very happy to be sharing selections from all three of my albums with the Marietta College community, where I also had a faculty release recital for my debut so album four years ago,” she said.

Goodman is known throughout North America as a soloist, recording artist, chamber collaborator, orchestral musician, educator, and clinician. Renowned for her “generous warmth of tone and a fluid virtuosity” (Charleston Gazette), “impressive artistry” (Tribune-Review), and “agility and emotion” (Pittsburgh Post-Gazette), Goodman has performed solo and chamber concerts, taught master classes, and given presentations at countless series, festivals, and universities.

She is a solo flutist of the Pittsburgh New Music Ensemble, principal flutist of the West Virginia Symphony Orchestra, and also an adjunct lecturer at West Virginia State University. She is a founding member of flute quartet PANdemonium4, the Leviathan Trio (flute, cello, and piano), and ASSEM3LY (flute, piano, and percussion). Classically trained as a mezzo-soprano, Goodman is also one-half of Chrysalis, a singing flutist and singing pianist duo.

A student of Walfrid Kujala and Robert Langevin, Lindsey received degrees from the Manhattan School of Music, Northwestern University, and Duquesne University.