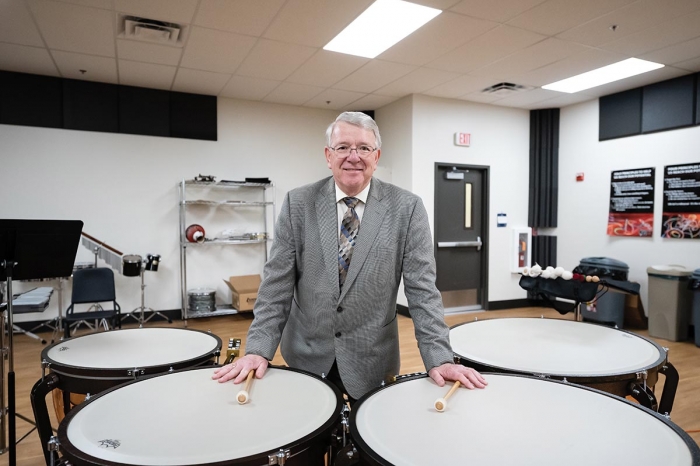 Marshall C. Kimball will do his best to keep his emotions in check when Marietta College hosts its annual Spring Band Concert at 7:00 p.m., Saturday, April 27th.

Kimball will officially be ending his 47-year career as a band director — the last 13 at Marietta College — as he directs his final performance. The concert, which is free and open to the public, is at the Peoples Bank Theatre, 222 Putnam St.

“Each composition being performed on the concert has some personal and historic meaning to my career,” said Kimball, Director of Bands and Instrumental Activities. “When programming this concert some options were given to the students and the significance of each was explained to the band members. They are very vested in this concert and it’s going to be a musical and magical evening for all in attendance.”

The concert is entitled the Grateful Heart Farewell Tour: Music with a History, and will feature the College’s Symphonic Band and Wind Ensemble, both under the baton of Kimball. All seats are on a first-come, first-serve basis. Doors to the auditorium will open at 6:00 p.m. A reception for Kimball will be held in the Band Rehearsal Hall, 208 Third St., immediately following the concert. This is located one block from the theatre and has a large parking lot and is handicap accessible.

“I know that some former students from my public-school teaching years and former college students are coming to the concert,” Kimball said. “I am truly looking forward to meeting and greeting everyone at the reception. Some students who are coming I haven’t seen since 1975 when I left my teaching position in Athens County to come to Marietta City Schools. It will be a great, however emotional, event.”

The concert will feature music that has been a part of Kimball’s career. There will be music to fit all tastes. Music being performed by the Symphonic Band will include Who’s Who in Navy Blue by John Philip Sousa, Pageant by Vincent Persichetti, Be Thou My Vision by David Gillingham, and Abram’s Pursuit by David Holsinger. The Wind Ensemble will be performing Exaltate by Sam Hazo, Amazing Grace by Frank Ticheli and Festive Overture by Dimitri Shostakovich.

Included in the Wind Ensemble portion of the concert will be the world premiere of a piece commissioned by Kimball for his final concert. To Persevere Is Everything, written by Dr. Andrew Francis, Professor of Music Theory and Composition in the Department of Music at Marietta, is a contemporary band composition representing the importance of persevering through difficult situations and finding the solution to succeed.

Francis is an esteemed colleague and friend of Kimball.

“I couldn’t imagine finishing my tenure at Marietta College without commissioning a composition by Andy and performing it,” Kimball said. “The opportunity for us to collaborate one more time and for my students to have the opportunity to work with a living composer is one I didn’t want to pass up.  I’m excited about this world premiere.”