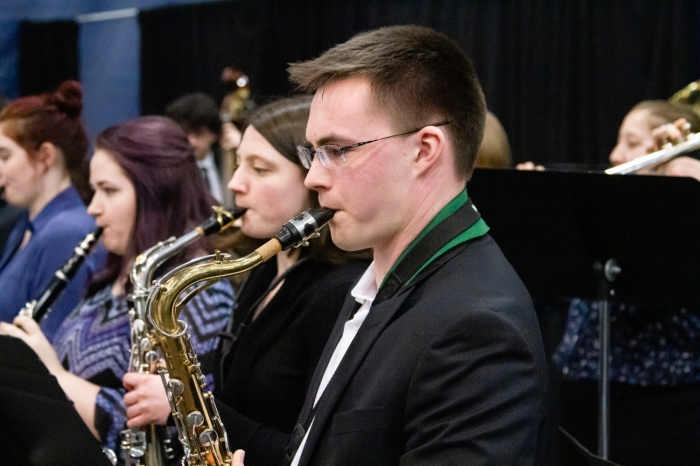 Marietta College’s Department of Music will have four different groups performing at Music at the Mall at 6:00 p.m., Friday, April 5th, at Grand Central Mall in Vienna, West Virginia. Admission is free.

Performing will be the Marietta College Funk Band, Floodstage, Jazz Band, and the Pio Pep Band.

The funk group is comprised of 15 musicians and vocalists, and it will perform “September” and “I Wish.” This group was recently coached by and rehearsed with Snarky Horns during an on-campus residency.

Floodstage involves six vocalists that perform a contemporary a cappella ensemble similar to Pentatonix. Floodstage will be singing a variety of a cappella selections.

The Jazz Band is made up of eight musicians, who will be playing “Take 5” and “Freddy Freeloader.”

The Pio Pep Band is comprised of members of the College’s Symphonic Band and Wind Ensemble, and it typically performs Marietta College football and basketball games. They will be performing music to get the blood flowing.

“The performances will feature the talents of our College musicians,” said Marshall C. Kimball, Music Department Chairman and Director of Bands and Instrumental Activities at Marietta College.