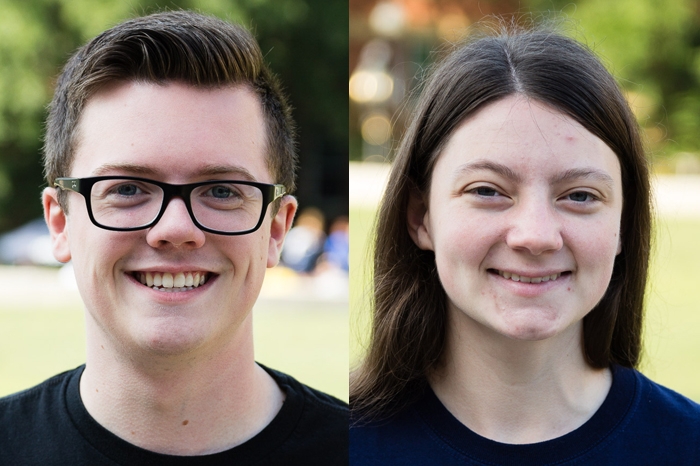 This is just the second class to be inducted into this honorary at Marietta College, as last year was the first year the honorary had a chapter on campus.

“Each year we start with a long list of students who meet the grade point average but this is only the starting point,” said Marshall Kimball, Chairman of the Music Department. “From there the other categories are rated by the faculty. This year we started out with 13 possible inductees and only three were initiated. We want to make certain the students chosen for this honorary feel like they have to strive to become a member and include it on their résumé. We are proud of our new inductees and wish them the best in their future endeavors.”

Wilken is a percussionist in the bands and a triple major in Mathematics, Economics and Environmental Science. While at Marietta College Wilken has been in the Symphonic Band, Wind Ensemble, Concert Choir, Percussion Ensemble and private percussion lessons.

Eakle is a member of the Symphonic Band, Wind Ensemble, Concert Choir and is enrolled in private lessons while being a double major in Music Therapy and Psychology. Xie was a student for just the 2017-18 academic year and is an English major. During her year at Marietta College, Xie was a member of the Women’s Choir and took private piano lessons.

“Those chosen for initiation into the music honor society are evaluated by the full-time music faculty on a set of 10 criteria,” Kimball said. “Included in that criteria are grade point average, scholarship, dependability, ability to take guidance and corrections well, being a strong member of a music ensemble, setting a proper example for fellow students, leadership skills, good decision-making skills, going beyond the expected, and acceptable musical growth in both ensembles and applied lessons.”

In order for a student to be chosen, they must average 85 percent on all of these areas from each full-time faculty members.