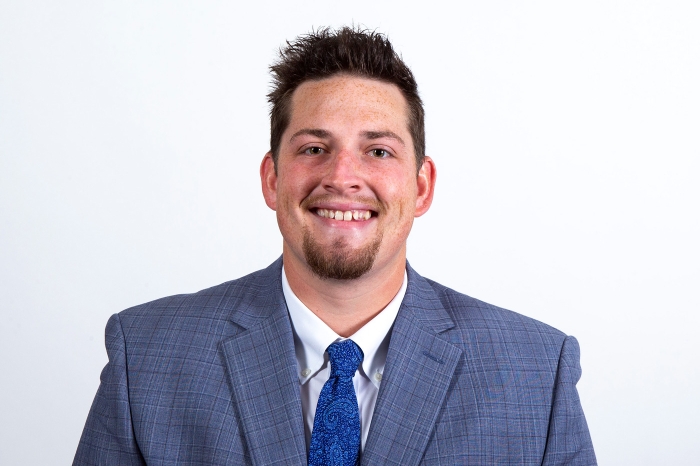 Gavin Linkous ’21 never had a doubt, but he admits that his career in sport management is moving at a faster pace than even he could have imagined.

Only a year after graduating from Marietta College with a Bachelor of Arts degree in Sport Management and immediately after completing his Master of Sport Management degree at Ohio University, Linkous joined the Bobcats Intercollegiate Athletics staff in April 2022 as the Assistant Athletics Director for Events and Sports Operations.

“I have enjoyed two amazing experiences at Marietta and OU, and both have helped me get to this point,” Linkous said. “I don’t touch much of what is happening on the field, but somehow and in some way, I get my hands on everything else that we are doing in athletics.”

In his position, Linkous manages gameday operations for all 16 varsity sports as well as facility rentals. Linkous handles the planning of Mid-American Conference (MAC) championships that are hosted on campus. He also manages a team of graduate assistants and undergraduate student employees for gameday operations.

“We’re wrapping up football, and that has been fun going through that,” he said. “I also just wrapped up the MAC Cross Country championship. Now I am focusing on basketball and wrestling, and in the spring, we will host the MAC golf championship in Athens, Alabama. That’s the first time we have hosted in another state, so I am really looking forward to this.”

Rick Smith, Associate Professor of Sport Management at Marietta, is not surprised by Linkous’ success.

“He drank the ‘Kool-Aid.’ He got involved with co-curricular activities early and often,” Smith said. “He then was admitted to the most competitive sport master’s program in the world and was elevated to an assistant athletic director role. He may be the youngest NCAA Division I Assistant AD in the country.”

Linkous proved his value to the athletic department as a graduate assistant last year.

“I was able to get my hands dirty in the operations world in the MAC wrestling championship,” he said. “Soon after that, I was approached about this position and decided it was the one for me. I am fortunate that I have been able to get experience and feel comfortable stepping up into this role. It allows me to learn and grow as much as it pushes me.”

At Marietta, Linkous also gained valuable experience outside of the classroom as President of SBA (Student Business Association). He also volunteered at the Boca Bowl in Florida in 2017 and 2018, was a game-day volunteer at a West Virginia University football game, and helped lead a group of students during the annual Community Baseball and Softball games on campus.

Linkous also enjoyed two internship experiences with the Western & Southern Open professional tennis tournament in Cincinnati, Ohio. The first year he was a facilities and communications intern, and in the second year, he gained experience in corporate partnerships.

He credits his former Marietta professor for being someone he can still reach out to for advice.

“Whenever I got asked about this position, Rick (Smith) was on the top of the list of phone calls I made,” Linkous said. “Knowing his experiences with college athletics, he was someone I could talk to about the job, and he gave me some great advice.”