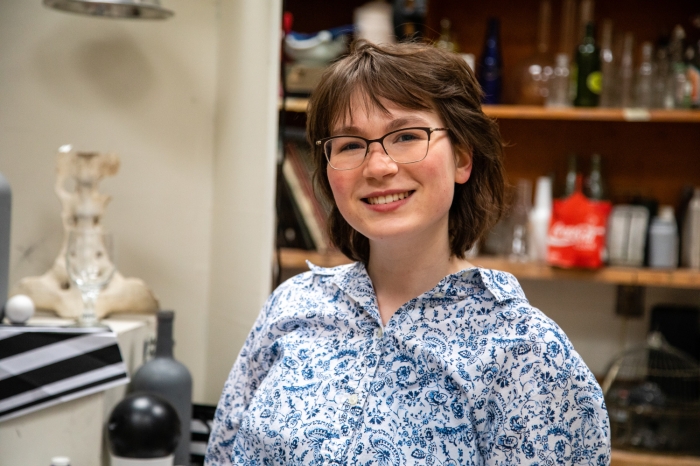 Allison Barnes ’24 (Lancaster, Ohio), who is a second-year student in the major, showed off in a big way what she has been learning during the final round of the PioBiz Competition on Thursday, December 2nd. Barnes, who presented her idea “Art on the Move” to judges and the Marietta campus, claimed the top spot.

Barnes, who has been working on the concept since March, earned $6,000 to put toward developing her business idea.

“I still have about a year of preparation before opening,” she said. “I’m beyond honored to receive the funds to make this process easier. I also want to thank Dr. Jackie Khorassani (Director of Entrepreneurship Program), Pamela Lankford (instructor), and everyone who has helped me up to this point. I couldn’t have done it without them.”

“Whether they do not know where to start or cannot afford expensive supplies, Art on the Move provides guidance,” she said. “More artistically developed individuals struggle to sell their art and get it into galleries. Lastly, collecting art is an expensive hobby. Art on the Move connects people who want to buy affordable art.”

PioBiz is a three-round business start-up competition open to all Marietta College students and their partners. Round 3 of the PioBiz Competition consists of submitting and presenting a fully developed business plan.

Two other student groups made presentations, and all were awarded money toward their project.

Finishing second and earning $3,000 was the team of Caleb Bradford ’22 (Lancaster, Ohio), Jacob Parsil ’22 (Temperance, Michigan) and Orv Taylor ’22 (St. Marys, West Virginia) with BTP Environmental. All three students are majoring in Petroleum Engineering and they hope BTP Environmental establishes operations out of the Lancaster area to begin acquiring orphan well-plugging contracts through ODNR in the Greater Central Ohio/near Southeast Ohio region, encompassing counties that have tens of thousands of orphan wells that require plugging and wellsite remediation.

Placing third was Haylee Mott ’23 (Kinsman, Ohio), who is majoring in both Entrepreneurship and Marketing, with Mott’s CrossFit. She earned $1,000.

This year’s competition was delivered in person in Thomas Hall’s Cooper Auditorium. The competitors were given up to 20 minutes to present their business plans, followed by a 15-minute Q&A with four judges. Upon the conclusion of the last presentation, each member of the audience voted electronically for their favorite business.