A Homecoming weekend for the record books 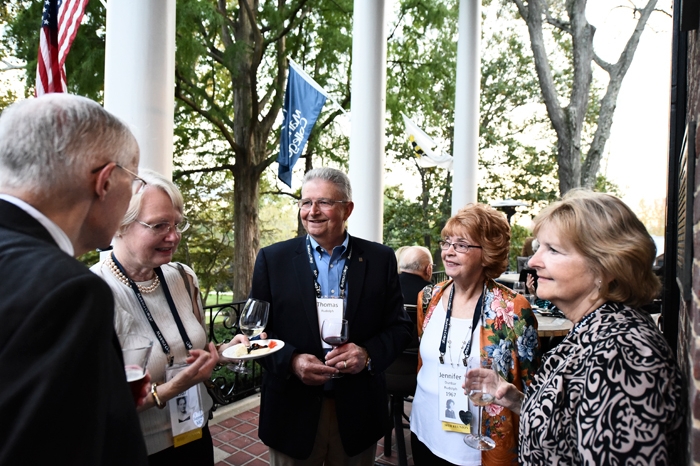 If you made it back to campus this weekend, you’ll agree that there really is no place like Marietta College when it comes to Homecoming.

Nearly 800 alumni and guests registered for the weekend, which featured many highlights.

Dianne Carella Swistak ’67 returned to campus for the first time in about 30 years to celebrate her 50th reunion with fellow members from the Class of 1967. She recalled her time as a student majoring in French and Spanish, and noted some memorable campus rules from her years at Marietta.

“We had a curfew,” she said. “We had to sign in and out of our dorm. My freshman year, I had to be in my room by 9 p.m., and women had to wear skirts or dresses Monday through Friday, but we were allowed to wear slacks on Saturdays.”

She and friend Kathy Dreher Brodsky ’67 stopped by the All Alumni & Friends Welcome on The Christy Mall on Friday.

During Saturday’s MCAA Awards Ceremony & Sports Tribute, the College recognized a special group of Pioneers for their service to Marietta, their profession and to their community. Christine Fry Burns ’66 and John Strotbeck ’79 were inducted into Marietta’s Hall of Honor. Earl Homsher ’64 and Jane Taylor ’57 were designated as Distinguished Alumnus/Alumna. Lindsey Romick-Rosendale ’07 and Ryan Whitnable ’11 were named Outstanding Alumna/Alumnus. Sharing the Liz Tribett Service Award are Bill Kingzett ’79 and David Reese ’79 for their work to support Marietta College athletics. Bernard Russi, Professor Emeritus of Mass Media, can add Honorary Alumnus to his list of accomplishments for his contributions to College and for his dedication to building strong ties with budding Mass Media students.

After the awards ceremony, students, alumni, friends and employees gathered for a lively pre-game tailgate outside of Don Drumm Stadium. The game welcomed 3,942 fans into the stadium to watch Marietta’s Pioneers dominate No. 24-ranked Heidelberg University.

During halftime of the football game — which ended with the Pioneers handing Heidelberg a 44-21 loss — Belle Huffman ’18 and Gabe Crowe ’18 were named Homecoming Queen and King, and President William N. Ruud was presented a check from the reunion classes for $401,003.74 in support of The Marietta Fund.

Angela Anderson, Vice President for Advancement, thanked the Alumni Engagement Office as well as various alumni groups for working hard to generate excitement around returning to campus for the special weekend.

“From start to finish, Homecoming 2017 has been a tremendous success,” Anderson said. “The campus community celebrated special dedications — the Communication Resource Center, the Erwin Plaque ceremony and the dedication for the new Music Therapy program — and the momentum continued through to Saturday’s win over Heidelberg, all the reunion gatherings, and then Sunday’s farewell breakfasts and brunches.”