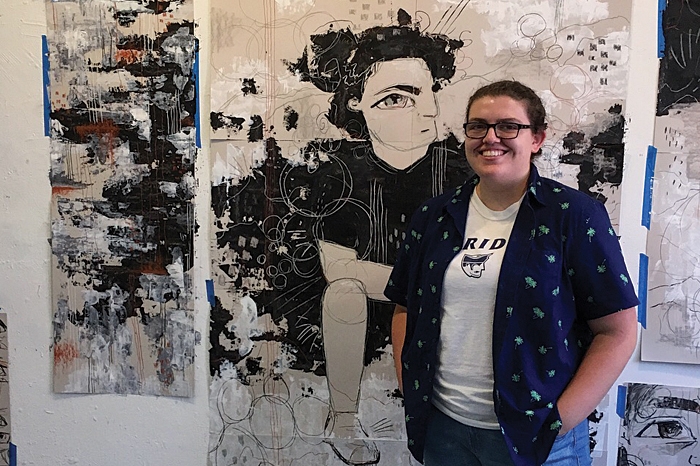 It took a little nudge from a professor to get Hailey Bennett ’18 to apply for the New York Studio School Drawing Marathon that was held in September.

Even then, Bennett was still hesitant about the possibility of spending a week in New York City doing almost nothing but drawing.

“I didn’t expect to be accepted,” she says. “However, they emailed me back within a day to let me know that I had been accepted. I didn’t think I was ready to go to New York, and then all of a sudden, I had to.”

McCoy Professor of Art Jolene Powell, who persuaded Bennett to apply, says her student is exactly the type of artist who thrives on opportunities like this one.

“Although I stay in contact and have close relationships with many of my students, Hailey is special,” Powell says. “She is the kind of student you have every few years that is extremely talented, hardworking and eager to learn and grow.”

Each day from Sept. 4 to 10, Bennett and 14 others in the class worked on their art from 9 a.m. to 6 p.m. Graham Nickson, who is the dean of the school, developed the internationally recognized marathon programs in 1988. As interest grew from others outside of the New York Studio School, the marathons were opened to new participants.

Bennett says she was one of the youngest in her group, and despite being nervous about going, the experience was positive.

“For some reason, I just feel less concerned about making perfect art,” says Bennett, who is double majoring in Studio Art and Graphic Design. “Now, I’m more excited about making art for fun and being more creative.”

The marathons are highly selective, and Bennett is just the third Marietta College student chosen to attend. Amelia Schroeder ’08 and Andy Taylor ’07 are Marietta’s other past attendees.

During Bennett’s week in New York, the class focused on abstract art.

“That’s not something I’ve done much of, so it was a little overwhelming for the first couple of days,” says Bennett, who is a graduate of Marietta High School. “This experience has opened my eyes to what I could do as an artist and that there were more options than I thought.”