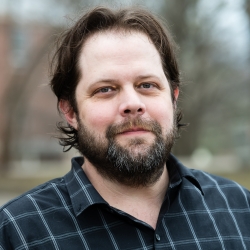 Andy Felt hails from sunny Southern California where he received his BA in Acting from CSU San Bernardino before moving east and earning an MFA in Directing from Ohio University. He was the founding Artistic Director of Shakespeare in the Garden (CA), studied Shakespearean acting in London with Brigid Panet (RADA), and has performed in many Shakespeare plays in locations as varied as Cape Cod MA, Los Angeles CA, and New Brunswick, Canada. Andy is a founding member of the Shakespeare by the River Festival (now Marietta Summer Theatre Festival) where he has directed the last 3 Shakespeare productions. He is also a certified Actor/Combatant with the Society of American Fight Directors and his sound design work has been featured at the Public Theatre (NY/NY), Stuart’s Opera House (OH), and Orlando Shakespeare Theatre (FL). Andy stage managed for The NY Hip Hop Theatre Festival at Performance Space 122 in 2001, has received multiple awards in stage management from KC/ACTF, and was the resident Assistant Technical Director of The California Riverside Ballet Company for 5 years. Currently, he is an Associate Professor as well as the Artistic Director of the Theatre at Marietta College.