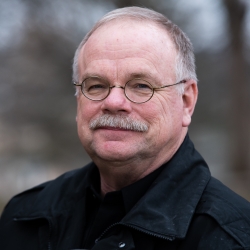 Bob Heddleston joined the Marietta College Police Department in 2016 after retiring from the Marietta Police Department where he served for 34 years, with the rank of Sergeant. He is a bike officer, rifle and taser Instructor for the College Police Department. He usually works the night shift, so watch for him on the Police mountain bike around Campus during the riding season. He and his wife Lynetta live in the Veto Lake area and have raised five kids. They have a Pekingese, Maltipoo and a black lab pup at home. He is a member of River City Runners & Walkers Club, enjoys Warrior Dash & Spartan Races, and plans to show his restored sublime green 1970 Dodge Dart Swinger 340 4 speed at car shows.