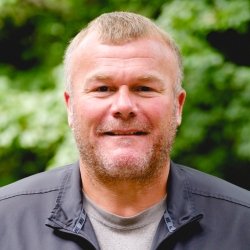 Brian Brewer quickly established himself as one of the finest head coaches in college baseball.

In 2018, Brewer led Marietta into the NCAA Tournament for the 11th time in his career as the Pioneer skipper. Four of those appearances resulted in Regional titles and a trip to the World Series. The Etta Express has also captured seven OAC regular season and three OAC Tournament championships with Brewer at the helm.

With three national titles since he took over as head coach in 2004, Brewer has secured his place in Marietta baseball history. With Brewer at the helm, the Etta Express won the 2006 national championship and became the first school since Rowan University in 1978-79 to win back-to-back Division III crowns with the 2011 and 2012 championships.

Brewer, also an Assistant Athletics Director at Marietta, led the Pioneers to a 48-8 record en route to the 2012 championship. The national championship gives Marietta an NCAA-record six titles. Along the way, the Pioneers notched their 29th OAC championship and 22nd NCAA Regional crown.

The 2011 Etta Express went 47-4 and ran through the postseason with an incredible 12-1 record.

In 2007, coming off the national championship, Brewer led the Etta Express to a share of the Ohio Athletic Conference (OAC) regular season title, its record 20th NCAA Mideast Regional crown and a record 19th trip to the NCAA Division III World Series. Again, he was named the Mideast Region Coach of the Year.

Brewer, a 1993 graduate of Marietta, had been the assistant coach at his alma mater since 2000. The Pioneers went 163-38 in his four seasons as the assistant. He helped guide the Etta Express to three OAC Championships, two NCAA Mideast Regional Championships and two NCAA National Runner-up finishes.

"It is an honor to be the head baseball coach at my alma mater," said Brewer. "Our goal is to not only continue the tradition of MC Baseball, but build upon the past successes of Coach Schaly and the MC Baseball Fraternity."

Brewer spent four seasons as the head coach of John Carroll University’s baseball program before returning to Marietta College. While at John Carroll, Brewer earned his master’s degree in 1995.

In 1998, Brewer led the Blue Streaks to a 25-18 record and a runners-up finish in the Conference, losing to Marietta in the OAC championship game at Pioneer Park. In recognition of his success, he was named the OAC’s Co-Coach of the Year along with Schaly.

"He’s a product of the program — he played here, coached here, and more importantly, he gained experience somewhere else," Schaly said. "He is a great teacher of the game of baseball."

The native of Glen Burnie, Md., wore the pinstripes from 1990-93. The Pioneers went 160-28 (.851) and made two appearances in the NCAA Division III World Series. He was a three-year letterman, playing primarily first base and designated hitter.