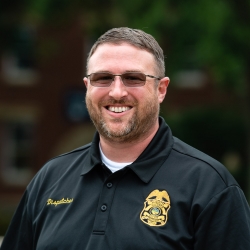 Before beginning his career in law enforcement, Jim spent four years in the United States Marine Corps as a Military Police Officer. In 2002, Jim graduated the Ohio Basic Police Officer Training Academy at Sinclair Community College in Dayton, Ohio. Upon completion of the academy, Jim served eight years as a police officer and four years as a dispatcher at the University of Dayton.

In 2014, Jim accepted a position at the Springfield (Ohio) 911 center where he served as a 911 Dispatcher for two years before relocating to the Marietta area with his wife and two young children in 2016. Upon relocating, Jim served as a 911 Dispatcher at the Wood/Wirt County 911 Communications Center in Parkersburg, West Virginia, until September 2018 when he accepted a position with the Marietta College Police Department as a full-time dispatcher. Jim resides in Vincent, Ohio, with his wife, Leslie Arnold and their two children, Rylee and Caden.