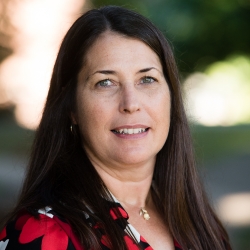 Jeanne Catalano began working in the Legacy Library as Circulation Supervisor in the Summer of 2013. She came to Marietta College from West Virginia University at Parkersburg where she was Circulation Supervisor for 10 years. Prior to that she worked at Appalachian Center for Economic Networks, (ACEnet) in Athens, Ohio, as a Teacher Coach and program manager. She also worked at Bellarmine University in Louisville, Kentucky, where she held the position of Coordinator of Instructional Media in the W. L. Lyons Brown Library.

Ms. Catalano began her career as a seventh- and ninth-grade teacher at Ferguson Junior High School in Beavercreek, Ohio and she coached volleyball and swimming at Beavercreek (Ohio) High School. She resides in Williamston, West Virginia, with her husband, Tim, and their four cats.