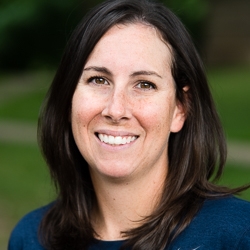 After one season as softball coach at Alvernia University, Jenn Castle returned to Marietta College in June 2018 to become the program's ninth head coach. She served as an assistant at Marietta for nine seasons.

In her one year at Alvernia, Castle led the Golden Wolves to a 23-14-1 overall record and an 8-8 record in the Commonwealth Division of the Middle Atlantic Conference.

Castle pitched and played the outfield for Ashland University from 2004-08. She earned All-Great Lakes Intercollegiate Athletic Conference (GLIAC) honorable mention in 2007 and All-GLIAC first team honors as a senior captain in 2008. Castle also received Academic All-GLIAC recognition as a junior and senior.

Castle is an experienced softball instructor, having worked numerous camps at both Marietta and Ashland. She has also been providing private lessons for athletes of all ages since 2005. Castle spent the summer of 2008 as an instructor at the Bianco School of Baseball in Canonsburg, Pennsylvania.

Castle earned a Bachelor of Science in Education from Ashland University in 2008. The Preschool-Third Grade certified teacher worked as a long-term substitute for a second grade class at Edison Elementary School, located in Ashland during the spring of 2009.

Castle lives in Marietta with her husband, Cody, and their daughter, Cambrie, and son, Carter.