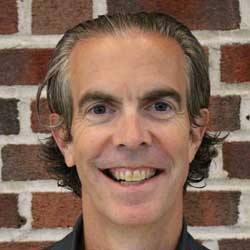 Joe Bergin ’86 has quickly turned Marietta's men's soccer program into a contender in the Ohio Athletic Conference. He took over as head coach for his alma mater in 2013. It is Bergin’s second stint at Marietta as he played keeper for the Pioneers from 1982-85. He is currently third on the career saves list and holds the single-season record for saves. Bergin was the starting keeper on the Pioneers only OAC championship team in 1984. He is 12th head coach in the 46-year history of the program.

After graduating, Bergin played for three different teams (San Fernando Valley Golden Eagles, Chico Rooks and Stanislaus County Cruisers) over eight years in the United Soccer Leagues (USL), the longest-standing pro league affiliate member of US Soccer. While in the USL, Bergin tended goal for former Brazilian World Cup defender Rildo Menezes and former Iranian National Team manager Afshin Ghotbi. “I learned a lot under those coaches in the USL. They taught me a lot about soccer philosophies and team management that I want to bring to the players here,” said Bergin.

Bergin has a combined 20 years of collegiate coaching and spent 10 years as the head women's coach at Agnes Scott College in Georgia where he was named conference coach of the year three times and led the Scotties to their first conference championship and NCAA tournament berth in 2012.

In the two years as the head man at Marietta, the Pioneers have increased overall wins by 50% and conference wins by 300% and the Pioneers made their first appearance in the Ohio Athletic Conference tournament since 2009. “It is very much a process, and I like the direction we are headed, but by no means is this a complete project, we still have work to do,” said Bergin.

Bergin graduated from Marietta with a Bachelor of Arts in Journalism and prior to following his passion of soccer Bergin spent 23 years as an Account Executive for the 3M Company. He spent 16 of those years calling on one of the largest accounts, The Home Depot. “I very much enjoyed working in sales, but soccer is my passion and coming back to Marietta was just too great of a draw to resist. The fact that I had a successful sales career is testament to the Liberal Arts education that I received at Marietta.”

Bergin lives in Marietta with his wife, Mae, and son, Cole.